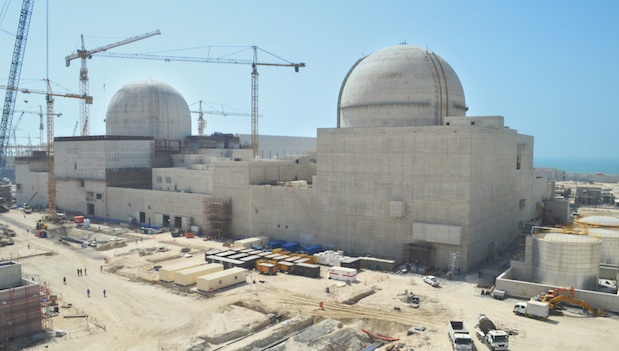 Contracts totaling $3bn (Dhs 11bn) have been awarded to more then 1,400 local companies for the construction of UAE’s first nuclear energy plant, the Emirates Nuclear Energy Corporation (ENEC) has confirmed.

ENEC’s Barakah nuclear power plant, announced in December 2009, is currently under construction in the Western region of Abu Dhabi.

According to the company, the contracts have been awarded over the last six years through collaboration between ENEC and its prime contractor, Korea Electric Power Corporation.

By incorporating of a number of UAE-based firms in the project, ENEC aims to contribute to the development of the local economy and stimulate the growth of heavy industry in the country.

“By working with ENEC’s dedicated Industrial Development Team to raise their standards and meet the unique requirements of the nuclear energy industry, Emirati companies are now contributing to the construction of the nuclear plant at Barakah and also gaining a competitive advantage in providing nuclear-quality services and materials worldwide,” ENEC’s chief executive officer Mohamed Al Hammadi said in a statement.

“A major factor in the UAE’s decision to pursue a peaceful nuclear energy programme was the opportunity to develop and enhance the nation’s budding industrial sector and provide a diverse range of opportunities for talented Emiratis.”

Some of the firms working on the project include Dubai-based cable manufacturing company Ducab and Emirates Steel.

The Barakah power plant, which began construction of its first unit in July 2012, is now said to be 65 per cent complete.

The project is progressing steadily with the first unit being 87 per cent complete, the second unit 70 per cent, the third unit 48 per cent and the fourth unit at 29 per cent completion.

When the four reactors are completed, ENEC aims for the programme to provide approximately 2 per cent of the UAE’s electricity needs and save up to 12 million tons of greenhouse gas emissions each year.