China and the GCC: Rebuilding the silk road - Gulf Business 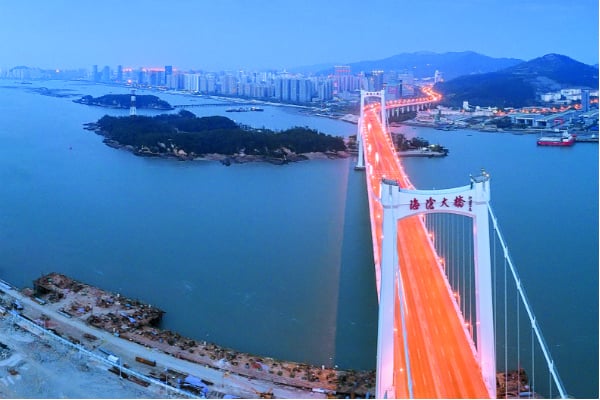 Major infrastructure projects appeared centred on routes that seemed to almost skip the region entirely, while some questioned whether a group of countries with traditionally close relations with the United States would embrace a rival super power.

Five years on and the region is emerging as one of the most important partners in a project that encompasses 65 countries with more than 30 per cent of global gross domestic product, 62 per cent of the population and 75 per cent known energy reserves.

Initial projects spearheaded under the BRI included Oman’s Duqm, which the sultanate is transforming into a major port and industrial zone with the help of up to $10.7bn in investment from a Chinese consortium. The UAE and China also signed an agreement to launch a $10bn strategic co-investment fund in December 2015 and in September 2016 China’s Cosco Shipping Ports was awarded a concession agreement to operate Container Terminal 2 at Abu Dhabi’s Khalifa Port for 35 years. Five Chinese companies have since pledged to invest $300m in the attached industrial zone while Bank of China has said it will provide financing to Chinese firms that establish operations there.

But it has been over the last 12 months that the GCC’s relationship with China on the project has truly taken a step forward.

Jinping pledged $20bn in loans and $106m in financial support to the Middle East at a conference in July and followed it with the first visit by a Chinese leader to the UAE in 29 years.

That trip saw more than 13 deals signed, from the approval of the first Chinese state-owned financial services firm to set up in Abu Dhabi Global Market, to a $1.6bn hydrocarbon survey contract awarded to China National Petroleum by Abu Dhabi National Oil Company.

A deal between DP World and Zhejiang China Commodities City Group to jointly develop a new Traders Market at the Jebel Ali Port and Free Zone set the tone for a Silk Road that is increasingly moving in new directions.

Among them, a memorandum signed between Kuwait and China last month to cooperate on the $86bn Silk City project, which will span 250 square kilometres across five islands and include a highway link to Kuwait City, major port and housing for 700,000 people. Discussions are also taking place to link Kuwait with a planned network of railways from China to Europe.

“We’re starting to see over the last 12 months a growing number of Chinese EPC contractors prepared to take equity stakes in projects not just in power but other sectors,” says Ben Simpfendorfer, founder and CEO of advisory firm Silk Road Associates

He believes the majority of regional opportunities under the BRI are expected to be in just five countries – with a $4.5 trillion market spread across Turkey ($794bn), Saudi Arabia ($707bn) and the UAE ($407bn) among other countries. While Turkey, the UAE, Saudi, Pakistan and Egypt expected to remain priority markets going forward.

Chinese firms sold more than $110bn of engineering procurement and construction (EPC) contracts to the Middle East and Pakistan between 2014 and 2016, with the majority of regional BRI projects in the 2013/2017 period in transport (26 per cent), power (20 per cent), manufacturing (12 per cent) and real estate (15 per cent).

“There has been a change in investment patterns, we’re starting to see growing flow into manufacturing – construction of industrial parks,” Simpfendorfer says.

As this change occurs, Chinese investment under BRI continues to surge.

In the first half of the year, Chinese enterprises signed 1,922 new contracts for projects in 61 countries amounting to $47.8bn – an increase of 18 per cent on the same period last year, according to Academy of China Council for Promotion of International Trade figures.

Meanwhile, Chinese banking institutions have participated in 2,700 projects over the last three years by providing credit worth nearly $400bn.

“The fundamental principle is to connect, co-construct and co-share based on bilateral consensus during the construction process,” says the academy’s director of international innovation and research division Liu Yingkui.

Among the key areas of focus for China’s BRI plans in the Gulf and wider Middle East are in the area of power generation – where new solar projects and other energy diversification plans present opportunities.

This was part of the agenda at the China for the World Energy Infrastructure Cooperation Forum, which was organised by US multinational General Electric (GE)

“In Abu Dhabi we’re going to build a 1,177MW solar energy project and also we have large projects in other countries, so laying even more of a foundation for energy projects.”

The winning bidders offered to provide electricity for 2.42 cents per kilowatt-hour, one of the most competitive prices seen in the solar industry.

Down the road in Dubai another key project is taking place in partnership with Chinese companies.

The Hassyan clean coal plant is being developed by a consortium of Saudi’s ACWA Power, Dubai Electricity and Water Authority (DEWA) and China’s Harbin Electric with GE environmental control systems and turbines. Chinese banks are providing Two thirds of the $3.4bn financing.

The 2,400MW project is described as the first coal-based power plant in the Gulf region and will operate in compliance with emissions and environmental standards for fuel gas plants, while meeting 25 per cent of grid requirements.

Under the terms of the contract, the consortium signed a 25-year power purchase deal to supply power at a levelised tariff of less than 5 US cents per kWh and is required to secure the delivery of coal.

“What we can see today, however, is a shift from the governments on infrastructure projects towards private owned or public private partnerships.”

“That’s where I think China can play an important role in facilitating these projects.” 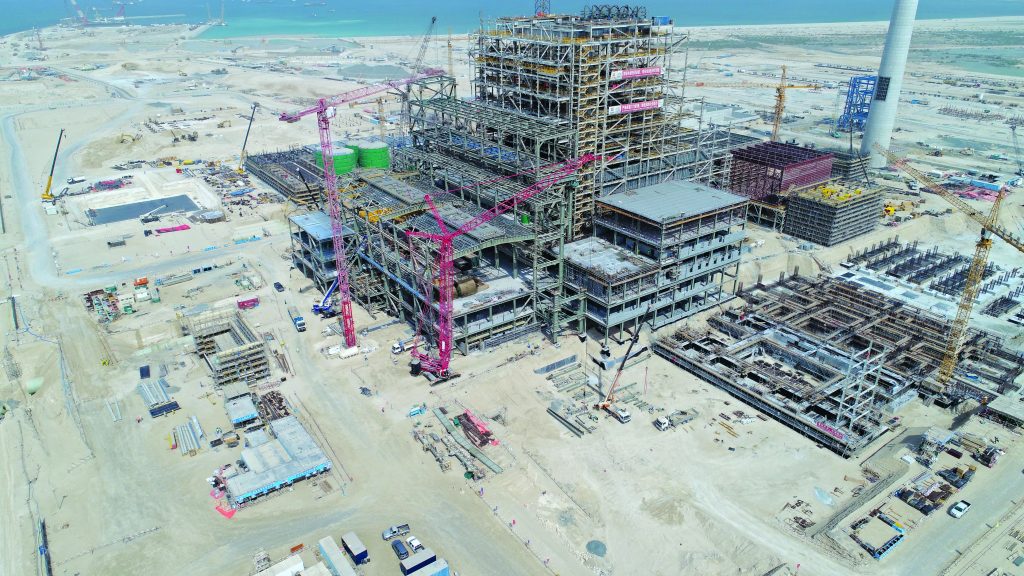 The Belt and Road backlash

While these projects are key examples of Middle Eastern countries working with China for major infrastructure projects, countries in other parts of the world have expressed reservations about the BRI agenda.

Elsewhere, Pakistan’s new government under Prime Minister Imran Khan is reported to be rethinking an $8.2bn rail link linking Karachi to the northwestern city of Peshawar and pushing for a review of other projects. In particular, officials are exploring funding options that depart from the traditional BRI lending model where host nations take on Chinese debt to finance construction, according to Reuters.

Similar concerns have been noted for developments in Sri Lanka and the Maldives and have forced China onto the defensive regarding one of the key prongs of its foreign policy.

At the Asia-Pacific Economic Cooperation (APEC) summit in Papua New Guinea last month, Xi Jinping delivered a speech defending the BRI saying it was “not a trap as some people have labelled it.”

The United States, meanwhile, has argued to the contrary.

In comments in a speech moments after Jinping’s, US Vice President Mike Pence warned against projects backed by Chinese loans saying the United States  “doesn’t drown our partners in a sea of debt” or offer “a constricting belt or a one-way road”, according to Bloomberg.

Simpfendorfer says along with political uncertainty in some countries, this perception issue is among the largest challenges facing BRI projects going forward.

“Chinese parties need to partner with local companies and ensure all parties will benefit, otherwise political opposition to Chinese participation will grow,” he argues.

Khalid Mansoor the chief executive of Hubco, which is working with China Power International Holdings Limited on a 1,320MW clean coal plant in Balochistan, Pakistan due to open next year, says countries also need to address a perception that Chinese companies are being given preference for BRI projects.

“It is more of a misconception and there is a need to really alleviate this concern. From my perspective it is a very transparent international bidding process. If the Chinese can compete the others also can compete.”

More broadly, he suggests more could be done to explain the knock-on benefits of projects of the wider China-Pakistan Economic Corridor for Pakistani workers and businesses, even if Chinese companies have won many of the contracts.

“When the corridor is completed that road is going to pass through special economic zones and that’s where the opportunity is. Some industry could be located within those special economy zones – but most importantly this kind of partnership between Chinese and Pakistani companies could be used to develop export opportunities and develop opportunities for the youth of Pakistan.

“These kinds of aspects should be kept under consideration – that would resolve a lot of political issues.”

Parneix, whose company GE has worked with Chinese EPCs to deliver more than 35GW of power to developing markets and has a further 20GW underway, says a shift away from traditional government financing models could help address the issue.

And he believes this is increasingly being seen in the Middle East with the growth of projects launched under the independent power producer model, which sees building and funding handled by private sector partners.

“The commitment of the country in some cases to purchase the power over a certain amount of time is very good for the country,” he says.

“The country will pay as it is using the electricity over a long period of time and the private sector firms will take the load of investment and managing the debt for that specific project.”

The July acquisition of a 24 per cent stake in the $3.87bn fourth phase of the Mohammed Bin Rashid Solar Park in Dubai by China’s Silk Road Fund shows some indication of the direction the BRI may take in the future.

And with a host of other projects and partnerships in the works, from housing to bilateral trade, tourism and investment, it appears the Middle East’s role in the initiative appears only set to grow in the future.