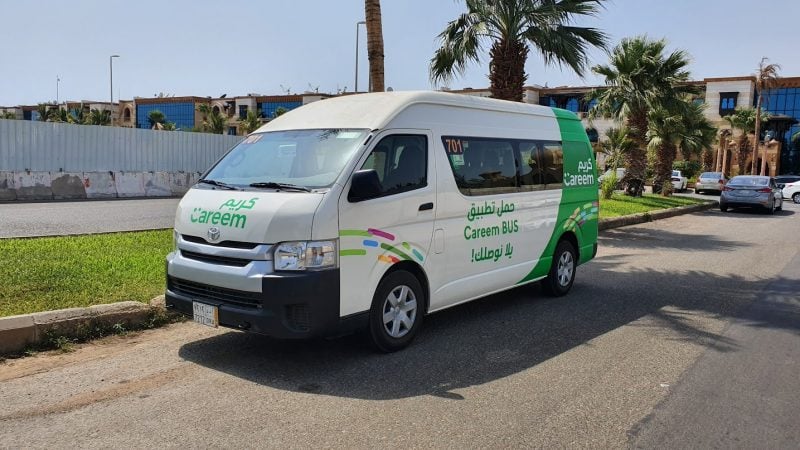 Dubai-based ride sharing app Careem has launched its bus services in Saudi Arabia with Jeddah as the first city of operations, it announced on Monday.

The service, operated with a fleet of 20 buses, will aim to cater to daily commuters, Careem said in a statement.

The price per trip is between SAR3 and SAR5 – depending on the route – and is “60-70 per cent cheaper” than the Careem car service.

Buses will be available between 7am and 8pm.

The service will initially start with 13-seater air-conditioned buses, with stops to be stationed at city landmarks.

Based on the feedback from customers, the service will look to add to its offerings, the statement said.

The bus service operates via a separate app from the ride hailing product and is available for download on iOS and Android.

Users can choose the pick up and drop off location after which they will have the option of picking the bus that best suits their time. They will also be able to track the bus as it arrives, the same as when ordering a Careem car.

Walk-on passengers will also be accepted.

The service is currently cash only, but soon passengers will be able to pay via the Careem wallet on the app, or by a registered credit card, the statement added.

The buses are provided in partnership with vendors who employ the drivers and pay them a fixed monthly salary.

Fares collected by the Careem bus drivers go to Careem, which pays the bus vendors a fixed daily amount, regardless of the number of trips they make, the company explained.

Careem initially launched its bus service in Egypt in December 2018, and last month started a bus service between the Saudi cities of Jeddah and Makkah.

Hadeer Shalaby, director of Careem Bus, said: “The 13-seater service has been a huge success in Egypt, easing traffic flows and providing a safe and efficient way to commute. The app based service is as seamless as ride-hailing a car, allowing customers to enjoy the benefits of our tech as well as enjoying cheaper travel and reducing traffic on the roads.”

Careem, which was recently acquired by Uber in a $3.1bn deal, currently operates in 15 countries. It has also branched out into food and package deliveries, scheduled rides as well as credit transfers.