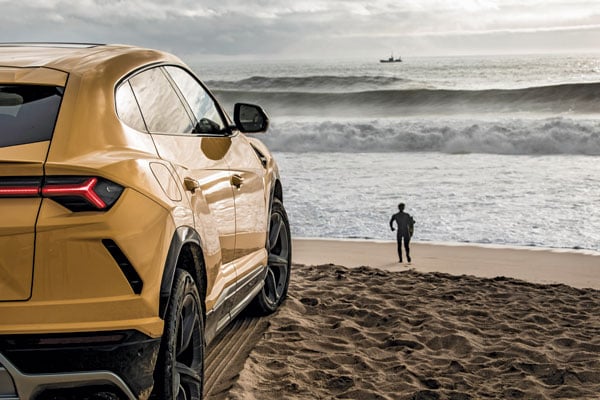 Fear, sometimes, isn’t the mere absence of courage; rather, it is the all-encompassing paralysing fit of sheer terror.

It is, as Italian professional big-wave surfer Alessandro Marciano will tell you, that sickening feeling when you’re supposed to be riding a 10-metre tall wave, but instead find yourself sucked into its belly. Still, Marciano spends six months every year chasing those big waves in Nazare, Portugal, home to the world’s tallest waves, a few of which reportedly tower up to 30 metres above the surface.

Fear is also what gripped me when I was at the wheel of the Lamborghini Urus in an off-road patch of a wooded area near the coast of Nazare. As part of a press convoy test-driving the Sant’Agata Bolognese-born SUV, we were making our way through a very narrow cavity with jagged rocks on either side, down a 50-degree steep slope with at least two feet of loose sand beneath the tires.

With not more than three centimetres to spare on either side, my mind was playing on loop two scenarios: either I was going to begin rolling down that slope uncontrollably and into the back of the Urus in front of me, or I was going to completely destroy the side of the car as I grazed against the rock. Maybe both.

The effective way to combat fear is to replace it with trust. In Marciano’s case it is trust in his high-intensity training where he stays underwater in static conditions for up to four minutes (he says 15 seconds being thrown around in a wave is equivalent to holding your breath for three minutes in static conditions), or walking on the seabed in shallow water with an anchor in hand to strengthen his muscles and internal organs. It’s that sort of training that allows him to replace his fear of those 15 seconds under a big wave.

In my case, I decided to trust the car. I stuck the car into Sabbia driving mode held a straight line and descended. The wheels didn’t spin or dig me further into the sand, the steering remained ultra-responsive to the slightest flick and the 60-40 front-rear torque distribution with a four-wheel steering capability meant that on that descent I was more sure-footed than a mountain goat. I exited that cavity within a few seconds – no Urus rear-ended, no rocks smeared with Lamborghini paint, no fear. 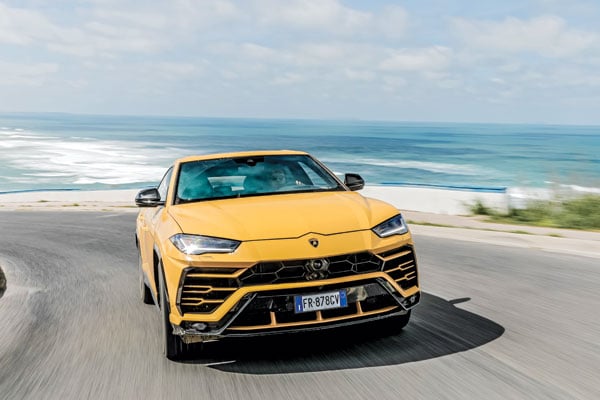 The Urus is not Lamborghini’s first SUV. Back in 1986, it launched the beastly Countach-powered LM002 4×4, nicknamed the Rambo Lambo. That car remained in production until 1993 when instead Lamborghini decided to focus solely on making menacingly fast road-hugging hypercars.

Up until the Urus launched last year, Lamborghini had just two main models – the Huracan and Aventador. The customers of each were generally mutually exclusive. But Lamborghini wasn’t looking to win over its existing customer pool with the Urus.

The Urus has reportedly snagged an entirely new generation of customers – 70 per cent of Urus buyers are buying a Lamborghini for the very first time.

The Urus is also shifting the demographics of these buyers – traditionally, around 90 per cent of Lamborghini customers were believed to be men whereas now many women are leading the charge when it comes to picking up the Urus – 1,761 of which were sold since deliveries began in the middle of last year.

Many of those new females buyers may have been in no small part influenced by megastars like Cardi B and Kylie Jenner, who already have a Urus of their own.

Betting on the Urus as the third pillar within its portfolio is a decision that’s reaping rich benefits for Lamborghini. In 2018, turnover increased 40 per cent to Eur1.42bn ($1.59bn) and the carmaker’s worldwide sales increased 51 per cent to 5,750 units.

Here in the Middle East, only months after the Urus made its regional debut, Lamborghini’s Head of Middle East and Africa Damien Percheron says that Urus is already a regional bestseller. “For this year, we expect the Urus to contribute to almost 70 per cent of our total regional car deliveries,” he said.

And that will, in turn, push the Middle East up in the pecking order of Lamborghini’s biggest global markets. “For the last five years, the Middle East has been one of the top ten markets for Lamborghini in terms of total car deliveries.

“With the introduction of the Urus, the region is expected to rise up to the top five [markets] for Lamborghini by the end of the first half of 2019.”

Our trip to Nazare in Portugal was for a special drive called Urus Esperienza Terra. Terra is one of six driving modes that you can choose with the Urus. These also include Strada (for regular street mode), Sport, and Corsa (in which the car lowers by 15mm).

Additionally, there are three off-road modes including Sabbia (for driving in sand), Terra (for proper off-road conditions) and Neve (for driving on snow). Of course, you can always select Ego mode where you can configure the transmission, engine responsiveness and suspension to your personal preference. 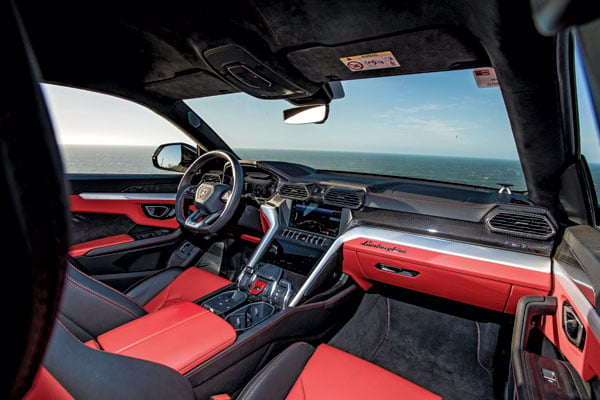 The exterior styling isn’t just a rebadged Q7. It’s distinctive Lamborghini, with crisp lines along its side and hood and an arrow-like profile up front that doesn’t look as aggressive as the hypercars but neither is it soft around the edges.

We put the Urus through several tests, beginning with the highway where we tease the twin-turbo V8 4-litre engine that can produce 641hp of power to propel the car from 0-100kph in 3.2 seconds. The Huracan has a ground clearance of 130mm and the Urus comes in at 158mm – this alone should convince you that Lamborghini had speed on its mind when designing this SUV.

We are soon driven to a marshy area where we test the car’s off-road capabilities. It’s here that I realise, as I do once again later that morning when I descend the 50-degree slope, that Lamborghini has built a proper off-road car. There’s 850Nm of torque at its disposal, and that twisting force begins to kick hard from as low as 2,250rpm.

Next, we’re led to a makeshift airport for light planes which was cordoned off for our drive. We were encouraged to go foot down (which we gladly did) as we performed slalom and braking exercises. Lamborghini hasn’t sacrificed any of its trademark dynamicity that its supercars are known for when building this SUV. The flat-bottomed steering wheel is light and ensures perfect control of a nimble 2.2-tonne SUV. 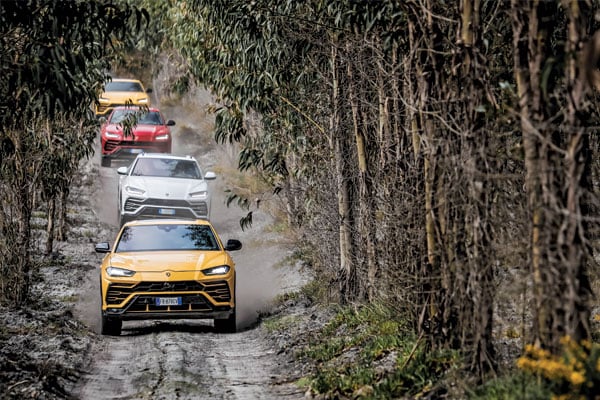 After a lunch break, we make our way to the final leg of the drive on the Pria do Norte beach in Nazare where we don balaclavas and helmets and ride shotgun as an expert from Lamborghini takes the wheel, sticks the car into Sabbia mode and goes hell for leather on the beach.

As the drive winds to an end we make our way to the nearby lighthouse where Marciano is waiting for us. He shows us around the surfing museum where surfboards from champions like Garrett McNamara – who discovered Nazare as a big wave surfing destination as recently as 10 years ago – and also of Brazilian surfer Rodrigo Koxa, who holds the Guinness World Record for surfing a 24.4-metre wave in Nazare two years ago, are displayed on the walls.

It’s also where Marciano shows us his own Lamborghini board on which the graphics are designed by the Lamborghini team.

Marciano is one of only around 100 big-wave surfers in the world. But to become a champion big-wave surfer requires a number of serendipitous factors to come into play. In Marciano’s case, it was a call from, McNamara a few years ago, inviting him to Nazare to show him the big waves.

The big waves in Nazare itself are a natural wonder – there’s a 16,000 foot deep Nazare Canyon, nearly thrice as deep as America’s Grand Canyon, just 400 metres off the coast which is the perfect big wave catalyst.

In Lamborghini’s case too, the Urus is the result of a perfect storm. The burgeoning SUV market which accounted for only 13 per cent of overall sales in 2013, today accounts for nearly 35 per cent of global sales and rapidly growing.

With the Urus, Lamborghini now has a problem that luxury carmakers can only dream of: it will be forced to cap production to 8,000 units by 2020 – with half that number expected to be the Urus – in order to maintain a halo of exclusivity.

Within the luxury SUV segment, Urus could be the real big wavemaker.