Burj Khalifa lights up with an image of Jacinda Ardern 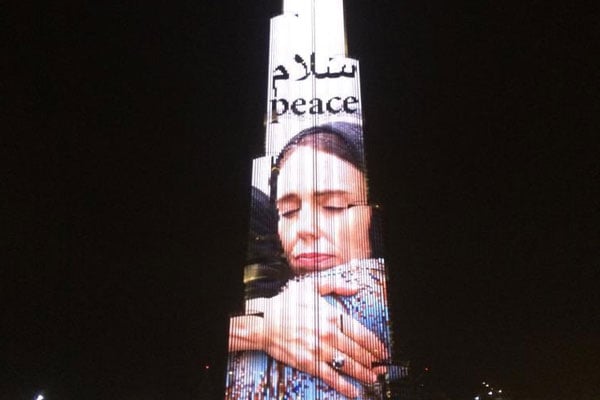 On Friday, the government of the United Arab Emirates decided to pay tribute to and show its solidarity with New Zealand who in the last few days was subjected to a mass shooting at two mosques in Christchurch which claimed 50 lives.

The New Zealand government was quick in its response to the tragic event and the country’s Prime Minister, Jacinda Ardern, reached out to members of the community to express her condolences and assure them that she would do everything to prevent such an incident from occurring again.

Praise for Ardern’s response to the crisis came in from around the world including the government of the UAE. Sheikh Mohammed bin Rashid Al Maktoum, Vice President and Prime Minister of the UAE and Ruler of Dubai tweeted his support for the Prime Minister on Friday.

New Zealand today fell silent in honour of the mosque attacks’ martyrs. Thank you PM @jacindaardern and New Zealand for your sincere empathy and support that has won the respect of 1.5 billion Muslims after the terrorist attack that shook the Muslim community around the world. pic.twitter.com/9LDvH0ybhD

He said, “New Zealand today fell silent in honor of the mosque attacks’ martyrs. Thank you PM @jacindaardern and New Zealand for your sincere empathy and support that has won the respect of 1.5 billion Muslims after the terrorist attack that shook the Muslim community around the world.”

Accompanying the tweet was an image of the Burj Khalifa which lit up on Friday evening with an image of Arden embracing members of the community and sympathizing with them.

On the same day, according to reports in The National, New Zealand also received a delegation from the UAE who were there to extend their solidarity with the victims of the shooting.

Leaders from across the GCC have expressed their condolences to the families of the victims of the terrorist attack.

Saudi King Salman said, “The heinous massacre of the safe worshipers of mosques in New Zealand is a terrorist act and underlines the responsibility of the international community to confront the rhetoric of hatred and terrorism, which is not recognised by religions or values ​​of coexistence among peoples.”

Abu Dhabi Crown Prince Sheikh Mohamed bin Zayed Al Nahyan earlier in the week said, “We call on the world to fight hatred. The UAE is a nation of tolerance and we affirm the need for love and coexistence.”