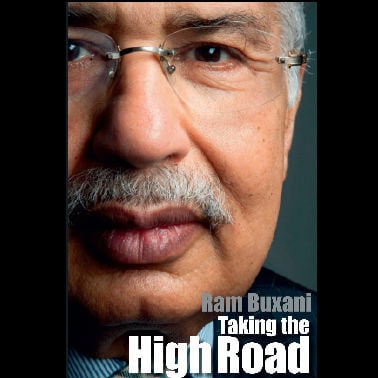 Dubai’s success story has at most times been credited to its citizens. Embracing people from around the world, the emirate has produced its fair share of highly accomplished entrepreneurs and leaders.

Buxani’s autobiography Taking The High Road shies away from narcissism and self-indulgence, painting instead an honest and credible account of his life in business, family and in the Sindhi community from where he hails. The book is also a fitting tribute to the spirit of Dubai and the realms within which an expat can grow.

Avoiding the pitfalls of becoming pedantic, Buxani dictates his life story with relative ease, starting out by relating his childhood spent in Hyderabad, Sind and Baroda, and then moving on to his meteoric rise as an employee with ITL in Dubai. One of his quotes: “The most important thing in life is saving, not spending,” is most telling of this. He goes on to share the process by which he saved his first million penny by penny, paisa by paisa, fil by fil.

Buxani also shares advice for budding entrepreneurs and future business leaders, combining industry and personal anecdotes. Along the way,
he also gives interesting insights into the enterprising spirit of the business community of Sindhis. The book also bears testimony to Sindhi women, and the role they play in fostering ideas and support for business growth.

First published in 2003 and translated into several languages, the new edition of Taking The High Road is a practical, no-nonsense approach to business that will be an inspiration to any aspiring executive in Dubai and the Middle East region.