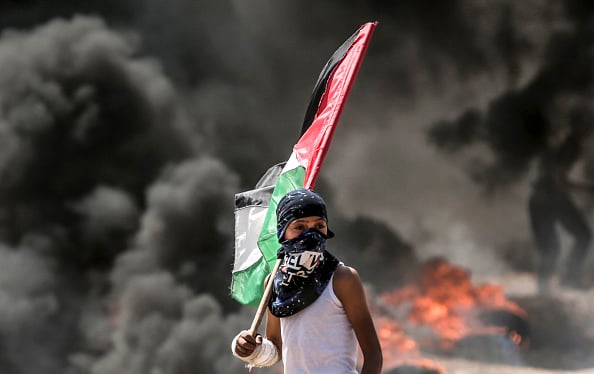 The Arab League will hold a meeting of foreign ministers on Thursday at the request of Saudi Arabia to discuss the Israeli-Palestinian crisis, Egypt’s state news agency, MENA, reported on Tuesday.

Palestinians buried the dead on Tuesday from the bloodiest day in Gaza in years, after Israeli forces killed 60 Palestinians near the Gaza-Israel border during demonstrations against the opening of the US Embassy in Jerusalem.

Read: US Embassy road signs go up in Jerusalem

MENA quoted an Arab diplomatic source as saying the meeting was to “confront the Israeli aggression on the Palestinian people and to move to confront the illegal decision taken by the United States to move its embassy to occupied Jerusalem.”

The Arab League is expected to hold a meeting on Wednesday at the level of permanent representatives.

Israeli forces shot dead two more Palestinians on Tuesday, although protests were quieter than the previous day. It appeared that many protesters had gone to mourning tents rather than back to the scene of Monday’s bloodshed. Mourners marched through the strip, waving Palestinian flags and calling for revenge.

“With souls and blood we redeem you martyrs,” they shouted.

Hundreds marched in the funeral of eight-month-old Leila al-Ghandour, whose body was wrapped in a Palestinian flag.

“Let her stay with me, it is too early for her to go,” her mother cried, pressing the baby’s body to her chest. The family said she died of inhaling tear gas.

At Gaza’s hospitals, families crowded the halls and spilled out of rooms as patients awaited treatment. Bassem Ibrahim, who said he was shot in the leg by Israeli troops, said at one stage he had feared losing the limb because of the delays.

“There are not many doctors. They are unable to see everyone, with all the injuries,” said Ibrahim, 23. “The number was unbelievable and they did not have time.”

On the Israeli side of the border, Israeli sharpshooters took up positions to stop any attempted breach of the fence should demonstrations break out again. Tanks were also deployed.

But if the violence tapered off, it still had a forceful impact internationally, with countries criticising both the Israeli use of deadly force and the US decision to open its new embassy at a ceremony attended by President Donald Trump’s daughter Ivanka and son-in-law Jared Kushner.

Netanyahu blamed Hamas for provoking the violence. “They’re pushing civilians – women, children – into the line of fire with a view of getting casualties. We try to minimise casualties. They’re trying to incur casualties in order to put pressure on Israel, which is horrible,” Netanyahu told CBS News.

The United States echoed that charge, with State Department spokeswoman Heather Nauert saying the United States regretted all loss of life but blaming “the misery that is faced by people in Gaza” on Hamas. She said Hamas used the US embassy move “as an excuse to rile people up and to encourage violence.”

“We have seen how Hamas continues to incite violence,” she told a briefing. “The activities that are taking place there … would certainly stop if violent protests were to stop.”

For six weeks, Palestinians have been holding Gaza border demonstrations demanding access to family land or homes lost to Israel when it was founded in the 1948 Middle East war. Israel rejects that demand, fearing it would deprive the state of its Jewish majority.

Palestinian medical officials say 107 Gazans have now been killed since the start of the protests and nearly 11,000 people wounded, about 3,500 of them by live fire. Israeli officials dispute those numbers. No Israeli casualties have been reported.

Palestinian leaders have called Monday’s events a massacre, and the Israeli tactic of using live fire against the protesters has drawn worldwide concern and condemnation.

The United Nations Security Council met to discuss the situation.

Israel has said it is acting in self-defence to protect its borders and communities. Its main ally, the United States, has backed that stance. Hamas, which rules Gaza and opposes Israel’s existence, denies instigating violence.

The Israeli military said at least 24 of those killed on Monday were “terrorists with documented terror background” and most of them were active operatives of Hamas.

May 15 is traditionally the day Palestinians mark the “Nakba”, or Catastrophe, when hundreds of thousands fled or were driven from their homes in violence culminating in war between the newly created Jewish state and its Arab neighbours in 1948.

More than 2 million people are crammed into the Gaza Strip, more than two-thirds of them refugees. Citing security concerns, Israel and Egypt maintain tight curbs on the enclave, deepening economic hardship and raising humanitarian concerns.

A senior Israeli commander said that of the 60 Gazans killed on Monday, 14 were carrying out attacks and 14 others were militants.

He also said Palestinians protesters were using hundreds of pipe bombs, grenades and fire-bombs. Militants had opened fire on Israeli troops and tried to set off explosives by the fence.

Many casualties were caused by Palestinians carrying devices that went off prematurely,” he said.

In Geneva, the UN human rights office condemned what it called the “appalling deadly violence” by Israeli forces.

UN human rights spokesman Rupert Colville said Israel had a right to defend its borders according to international law, but lethal force must only be used a last resort, and was not justified by Palestinians approaching the Gaza fence.

The UN rapporteur on human rights in the Palestinian territories, Michael Lynk, said Israel’s use of force may amount to a war crime.

Many shops in East Jerusalem were shut throughout the day following a call by Palestinian President Mahmoud Abbas for a general strike across the Palestinian Territories. A 70-second siren was sounded in the occupied West Bank in commemoration of the Nakba.

Most Gaza protesters stay around tent camps but groups have ventured closer to the border fence, rolling burning tyres and throwing stones. Some have flown kites carrying containers of petrol that spread fires on the Israeli side.

On Tuesday the number of protesters gathered at the frontier was estimated by the Israeli army at 4,000, well down on Monday.

Monday’s protests were fuelled by the opening ceremony for the new US Embassy in Jerusalem following its relocation from Tel Aviv. The move fulfilled a pledge by US President Donald Trump, who in December recognised the city as Israel’s capital.

Palestinians envision East Jerusalem as the capital of a state they hope to establish in the occupied West Bank and the Gaza Strip. Israel regards all of Jerusalem, including the eastern sector it captured in the 1967 Middle East war and which it later annexed, as its “eternal and indivisible capital”.

Most countries say the status of Jerusalem – a sacred city to Jews, Muslims and Christians – should be determined in a final peace settlement and that moving their embassies now would prejudge any such deal.

Netanyahu on Monday praised Trump but Palestinians have said the United States can no longer serve as an honest broker in any peace process. Talks aimed at finding a two-state solution to the conflict have been frozen since 2014.

Trump said on Monday he remained committed to peace between Israel and the Palestinians. His administration says it has nearly completed a new Israeli-Palestinian peace plan.

The United States on Monday blocked a Kuwait-drafted U.N. Security Council statement that would have expressed “outrage and sorrow at the killing of Palestinian civilians” and called for an independent investigation, U.N. diplomats said.

Hamas’ role in the violence must be investigated, he added.