US Embassy road signs go up in Jerusalem - Gulf Business 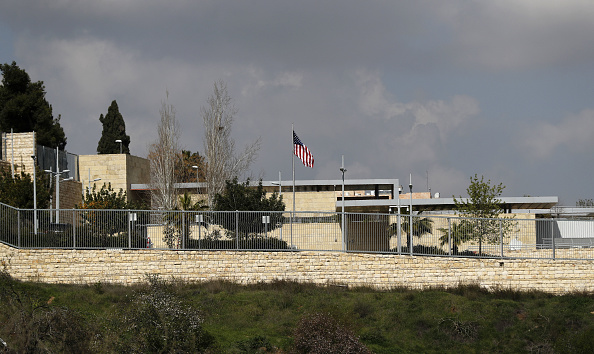 US Embassy road signs went up in Jerusalem on Monday ahead of next week’s opening of the mission in accordance with President Donald Trump’s recognition of the city as Israel’s capital.

Trump says he is making good on US legislation and presidential pledges dating back decades. Other world powers have not done so, sidestepping one of the thorniest disputes between Israel and the Palestinians, who want their own state with East Jerusalem as the capital.

Workmen installed the black-and-white signs, in English, Hebrew and Arabic, along roads leading to a US consulate building in south Jerusalem that will be remodelled as the embassy when it is formally relocated from Tel Aviv on May 14.

“This is not a dream. It is reality. I am proud and moved to have hung this morning the first new signs that were prepared for the US Embassy,” Jerusalem Mayor Nir Barkat wrote on Twitter.

Israel captured East Jerusalem from Jordanian control in the 1967 Middle East war and annexed it in a move not recognised internationally. The last round of peace talks on a Palestinian state in the West Bank and Gaza Strip collapsed in 2014.

“This [embassy] move is not only illegal but will also thwart the achievement of a just and lasting peace between two sovereign and democratic states on the 1967 borders, Israel and Palestine living side by side in peace and security,” Palestinian negotiator Saeb Erekat said in a statement.

At the consulate site, mechanical diggers cleared scrubland as workers posted embassy signs along city roads and hung US, Israeli and Jerusalem flags from street lights.

“We are thrilled that the American Embassy is coming here, finally,” said Ruthann Nahum, 64, a New Yorker who moved to Israel 35 years ago. A restaurateur, she lives in the overwhelmingly Jewish neighbourhood of Arnona.

“Welcome Trump, we belong here, forever. Jerusalem is our capital,” she said.

The Trump administration has left the diplomatic door open to a negotiated settlement between Israel and the Palestinians on defining Jerusalem’s borders.

“By recognising Jerusalem as the capital of Israel and the seat of its government, we’re recognising reality,” US secretary of state Mike Pompeo said during a visit to Israel last week.

“I also stress, as President Trump has said in December, the boundaries of Israeli sovereignty in Jerusalem remain subject to negotiations between the parties, and we remain committed to achieving a lasting and comprehensive peace that offers a brighter future for both Israel and the Palestinians.”

In March, Guatemalan President Jimmy Morales said that his country would relocate its embassy from Tel Aviv to Jerusalem on May 16, two days after the US move.

Israeli Prime Minister Benjamin Netanyahu said in April “at least half a dozen” countries were now “seriously discussing” following the US lead, though he did not identify them.