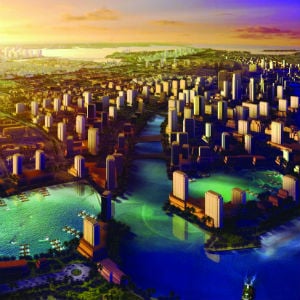 Regional unrest since January, and fear of it spilling through neighbouring borders has inspired leaders across the Arab world to make concessions to their frustrated citizens. After protests reached the Gulf in February, the Kingdom of Saudi Arabia quickly put the wheels in motion to resolve the country’s deepening housing issues.

In March, the King formally established a Ministry of Housing, along with a Real Estate Development Fund, and made what is being described as the biggest capital investment in KSA’s history a whopping SR 250 billion (over $66 bn USD) and also gave a Royal decree to construct 500,000 housing units, with a goal to create a million new homes by 2014.

Of these five planned new laws which the public hasn’t seen yet there are two that have become unseen celebrities in their own right: a mortgage law, and a foreclosure law.

The Registered Mortgage Law will allow mortgages to be created, while the Enforcement and Execution Law will allow banks to pursue debtors who default on their mortgages through foreclosure. Glenn Lovell, senior associate, Al Tamimi law firm in Riyadh, explains: “The local police are reluctant to evict people and this law aims to address the situation by having compulsory execution of a judgement or mortgage.”

While the laws are being talked about by bank, developer, and citizen alike, the elephant in the room is that things aren’t going to fall into place as soon as they are passed, as lenders will wait to see how courts will handle foreclosures. It’s an important question considering that until now evictions haven’t often been permitted and registration on a land title coupled with foreclosure are defining features of a mortgage. Without the foreclosure mechanism, mortgages are actually just long-term bank loans to buy property.

Paul Gamble, head of research at Jadwa Investment in KSA, says only Saudis with a good credit rating have been able to borrow money to buy a house “Lenders are unsure about the foreclosure process; they’re only lending to borrowers with good credit ratings.”

The way it is

As it stands, the five laws are in the process of being passed. Al-Tamimi’s Lovell reviewed a draft of the laws two years ago, and while he explained the premise of each, he added, “I don’t know what they look like now.”

While the laws are being hailed as revolutionary, Gamble says its important to consider that there are already housing finance products available in KSA, from lenders and the government.

In terms of government finance, a SR40 billion increase in the capital of the REDF (Real Estate Development Fund) last month is also a big deal. The fund, which gives interest-free housing finance to people, is the main existing form of housing finance. “Until now, the problem with the fund was it didn’t have enough money to lend and has taken a long time to make lending decisions,” says Gamble. “In the past, people waited 8-10 years to get a loan from the REDF.”

Estimates of how many Saudis currently own their own homes range from a meagre 10, to an optimistic 30 per cent. With a population of just over 27 million, the kingdom boasts a largely young population.

Jadwa’s Gamble says success of the laws boils down to one thing: “If the banks find it profitable, are happy with the legal framework and if it works properly in terms of foreclosure, then [they] will find the money for it to work. Banks here are very liquid and if they can securitise the mortgage proceeds and bond market activity picks up, financing will not be a problem.”

Patrick Gaffney is a real estate analyst with HSBC Middle East. He says, “Banks are going to be uncomfortable with lending unless they can foreclose, or if governments can guarantee the loans in some way.”

But it’s difficult to speculate on a law people haven’t seen yet, and Gamble notes borrowers might not get what they want “The law may not be able to meet the aspirations of borrowers, as high property prices mean that those on low incomes may not be able to borrow the amount necessary to finance the large property that many Saudis aspire to.”

If the price is right

The underlying demand for housing, combined with the development of the mortgage law, is set to benefit the broader economy as well as those needing affordable housing. According to a recent Bank Saudi Fransi report, public and private developers will have to create 275,000 units a year until 2015, in order to accommodate the current need.

“The affordable housing sector has historically been overlooked by the development community in GCC,” says Burch, noting it’s an area of massive potential. He adds: “Private developers are looking at affordable housing we can see that demand is in that sector. This is a growth area that will be boosted by the mortgage law.”

Stefan Burch is the associate director at regional real estate specialists, Cluttons Middle East in Bahrain, who have recently set up a Jeddah office. He says Saudi represents great potential and plans for a Riyadh office are already being made.

“There’s massive potential in Saudi Arabia, partly underpinned by great demographics and a young and vibrant population. There’s lots of money being put into job creation and education, and prudence in pursuing counter-cyclical spend policies, infrastructure etc., which is going to serve the country in great stead,” says Burch.

If liquidity can reach the market, Burch says the new ministry, fund and laws will be “nothing but good” not only for the broader economy but also, “for the larger numbers of people who want to get onto the housing ladder.”