Abu Dhabi is set to introduce a 30 per cent tax on alcohol sold in shops and a fee for licences to purchase it.

It was unclear if there would be an impact on prices in bars and restaurants the emirate.

Abu Dhabi’s Department of Culture and Tourism informed outlets of the changes in a circular issued at the end of May.

They will come into force in Abu Dhabi and Al Ain on June 15 after the holy month of Ramadan.

Some locations are offering discounts in the build-up to the deadline, which will also see a Dhs230 ($63) fee charged for two-year licences allowing non-Muslims to purchase alcohol. 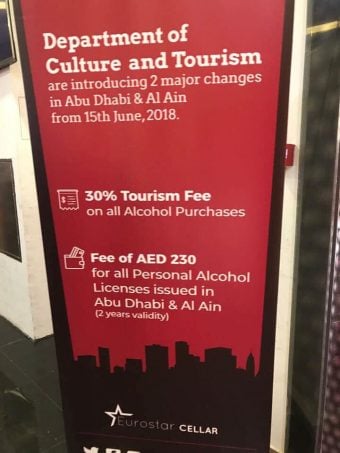 Residents could previously obtain an alcohol licence for free provided they met requirements including being over the legal drinking age (21), possessing a residency card and earning more than Dhs3,000 ($817) a month.

The proceeds from the new tax and licence fee will be collected by the Department of Culture and Tourism.

Expatriates said on social media they would be stocking up to take advantage of lower prices ahead of the change.

The tax could help offset reduced revenues from tourism and municipality fees after the emirate announced cuts to both on Tuesday.

The Committee also approved a proposal to reduce municipality fees for hotel rooms from Dhs15 ($4) to Dhs10 ($2.70) per room, per night and to collect the fees on a half-yearly, instead of monthly basis.