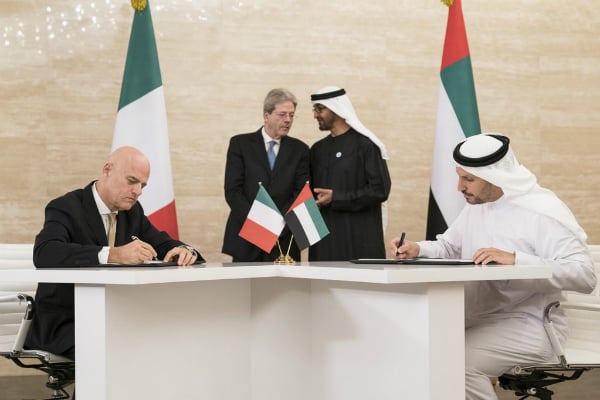 The company was awarded a 10 per cent stake in the Umm Shaif and Nasr concession and a 5 per cent interest in the Lower Zakum concession.

ADNOC said it was the first time an Italian energy company had been given concession rights in Abu Dhabi’s oil and gas sector.

Eni paid $575m for the Umm Shiaf and Nasr concession and $300m for the Lower Zakum concession.

“Our partnership with Eni, and other concession partners, will enable us to accelerate our growth, increase revenue and improve integration across the upstream value chain, as part of our ongoing transformation and build on the foundations that have been laid to deliver a more profitable upstream business,” said ADNOC group CEO Sultan Al Jaber.

Eni CEO Claudio Descalzi said the company would use its experience in development and production to support ADNOC’s objectives to improve cost efficiency and oil recovery.

He added that the agreement “would create synergies, bringing mutual benefits from capital, resources and knowledge sharing”.

The Umm Shaif and Nasr and Lower Zakum concessions are part of the former ADMA offshore concession, which was split to create more commercial value and bring additional international partners onboard.

Other investors in the Lower Zakum concession include an Indian consortium led by ONGC Videsh and Japan’s Inpex.