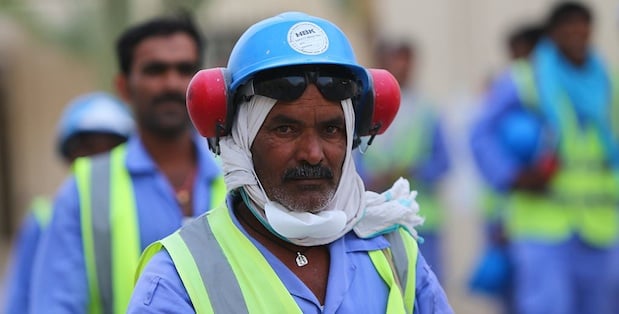 Nearly 60 per cent of Qatar’s residents live in labour camps’, according to an April 2015 census report released on Sunday by Qatar’s Ministry of Development Planning and Statistics (MDPS).

The MDPS found that out of the official population of 2.4 million people, 1.4 million reside in ‘labour camps’. This comes to just over 58 per cent of the country’s population, up from 54 per cent in 2010.

The authority describes any dwelling occupied by seven or more individuals who do not fit the traditional definition of a household as a labour camp. This means the figure likely includes retail and service-sector employees as well as blue-collar workers.

Since the census, Qatar’s population has grown to 2.5 million people.

In recent years, concerns regarding the quality of accommodation offered to migrant labourers working on Qatar’s infrastructure projects have put the country under scrutiny.

The emirate, which will host the football World Cup in 2022, has been condemed by several human rights groups including Amnesty international, which described labourer accommodation as “squalid and cramped”.

In a weekend visit to the Qatari capital Doha, Indian Prime Minister Narendra Modi expressed his concerns regarding the treatment of the country’s 630,000 Indians.

“The Qatari side briefed the Indian side on the reform in labour laws which would protect the interest of skilled and unskilled labor in Qatar,” said a statement issued by the prime minister’s office following the visit.

To add to concerns, a camp in the southwest of the country caught fire last week, leaving 11 people dead and 12 injured. The camp housed labourers working on a waterfront tourism project.

Qatar has responded to criticism by building new workers’ housing complexes, including the $825m ‘Labor City’, south of the capital of Doha. The complex can house up to 70,000 foreign workers and incorporates shops, cinemas and a cricket stadium.

Labor City is one of seven worker ‘cities’ under development, which will accommodate almost 260,000 people in total.