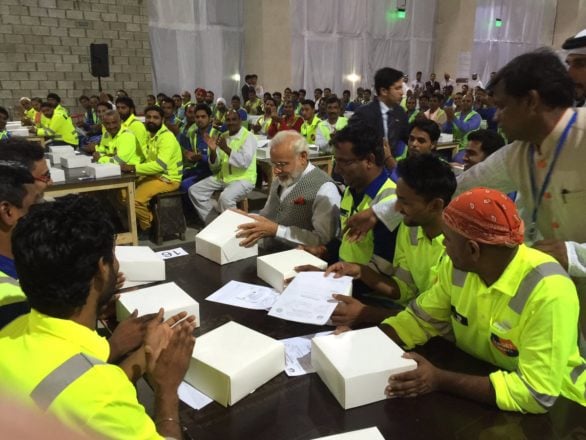 Indian Prime Minister Narendra Modi pledged to press for changes to rules and regulations to benefit Qatar’s Indian population during his first official visit to the country.

During his two-day trip, which ended yesterday, he met with Qatar’s Emir, business leaders and members of the country’s 630,000-strong Indian expat community, before flying to Switzerland last night, according to local publication Doha News.

During his stay Modi met with workers at a medical camp in Msheireb Downtown and tweeted about his experience.

“Smiles and snacks in Doha…my first programme in Qatar was a visit to a Workers’ Camp in downtown Doha,” he said on June 4.

Excerpts of the speech he gave to workers were tweeted in English by the PM’s spokesman Vikas Swarup.

“I am aware of the issues that you all face here & whenever I meet the leadership of this part of the world, I raise these issues.

“If you have some issues on changing some rules and regulations, I will work with you all to bring about these changes.”

During the meeting he was quoted as saying: “India is a land of opportunity. I have come to personally invite you to take advantage of this opportunity. All of you recognise the potential of India. I will addres the bottlenecks you have identified.”

“The Qatari side briefed the Indian side on the reform in labour laws which would protect the interest of skilled and unskilled labour in Qatar,” said a later statement issued by the prime minister’s office.

Before his arrival, worker rights group Migrant-Rights.org urged the PM to fight for labour rights changes for Indian workers.

Its recommendations included better health and provisions for Indian expats, more support for returning Indians, increased protection for unskilled workers, the introduction of legal aid for workers and fair salaries for Indian nurses in the country.