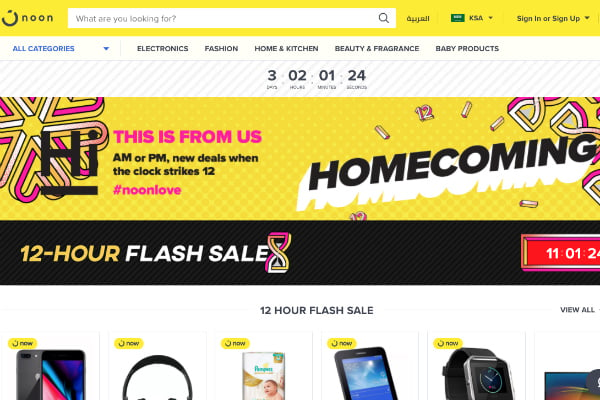 The site said its offering would be available to Saudi customers from mid-day Tuesday following a quiet launch in the UAE at the end of September.

The company, which is headquartered in Riyadh, is marketing itself as the first Arabic e-commerce platform, as it prepares to take on Amazon.

The US giant acquired the region’s most established online shopping player Souq.com earlier this year for an estimated $650m and is slowly making more global products available to customers.

Noon is countering with its own extensive product range at launch, including electronics, fashion, beauty, babycare, home and kitchen and groceries, supported by a dedicated distribution hub and logistics network.

“Noon brings a dynamic, locally-driven and customer-oriented digital marketplace to the Kingdom serving the community and offering a new retail and much improved experience,” said Alabbar.

“With talented young Saudis driving its operations, along with being powered by Saudi and regional retailers showcasing their amazing products, the platform also offers Saudi entrepreneurs, including start-ups, to be part of a fast-growing digital ecosystem.”

The marketplace was originally meant to launch in January but suffered a series of delays and management changes.

This followed a series of e-commerce acquisitions by Alabbar and his related companies including a $151m deal for a 51 per cent stake in Namshi by Emaar Malls and the acquisition of JadoPado by by an Alabbar-backed technology fund.

Noon will be hoping these troubles are behind it as it prepares to grab a slice of a Gulf Cooperation Council e-commerce market consultancy A.T. Kearney estimates will grow from $5.3bn in 2015 to $20bn by 2020.