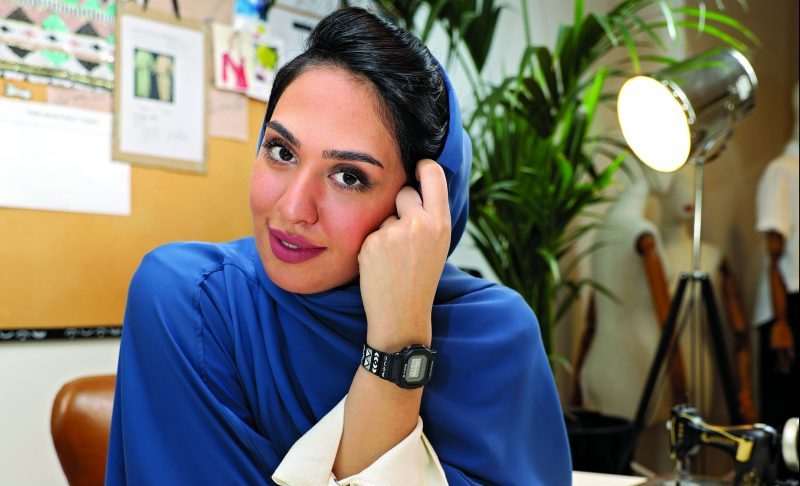 “I think failing is very healthy,” says 27-year-old Emirati entrepreneur Noora Al Alawi. It’s the sort of advice that makes perfect sense when you consider what she says next.

“When you fail at least you’ve tried. To fail is not to fall. To fail is to fall and never get up again. Failing means you’re actually doing something.”

Failing, though, wasn’t something on the cards for this businesswoman when she joined her mother’s tailoring store six years ago. “I did the hiring and firing. I also rebranded it as a homegrown Dubai-based womenswear clothing brand called Nuna Atelier,” she says.

Noora is now the creative director at Nuna Atelier which specialises in fashionable ‘throw-on’ outfits.

As Noora explains: “It is a cross between a long coat and a traditional Emirati abaya. You don’t have to be Arab or a specific race or demographic or size to wear an abaya. You could be a casual woman who would wake up in the morning and throw something on.”

The clothing brand’s flair for throw-ons is one that hasn’t escaped the attention of A-listers including Kendall Jenner and Khloe Kardashian, who have worn the brand’s creations. Much of that viral success can be traced to its social media positioning – Nuna Atelier now has over 38,000 followers on Instagram.

Eager to expand the business, the opportunity to do so found Noora and her team rather than the other way around. Japanese watchmaker Casio approached them to collaborate on a timepiece, giving Nuna Atelier its first product expansion into accessories.

Explaining how the collaboration came about, Noora says, “They [Casio] realised that our brand – the aesthetics, the visuals, how we present ourselves on our social media, our marketing – was outstanding. They saw the impact and the influence we had and that’s how they approached us.”

Over a period of six months, Noora and the Casio team brainstormed on design ideas and they finally came up with the Casio Baby-G BGD-560-1 x Nuna Atelier wristwatch, limited to only 40 pieces and launched earlier this year. Twenty of these watches can be found at the Concepts store in Citywalk, Dubai, while another 20 have been allocated to VIPs and bloggers.

The black strap consists of a unique design conceived by Noora and her team in Dubai.

Now that Noora has her first accessory and product collaboration behind her, what’s next? “The future plan for Nuna Atelier is to scale this start-up and take it worldwide. We want to tap markets in the East and the West.

“It’s in your 20s and your 30s when you are at your full potential and are mentally and physically fit. This is when you really need to strive to achieve your goals.”

Advice that she’s living out to the full.