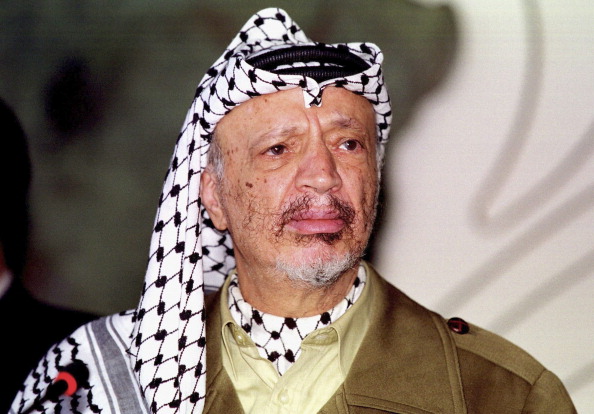 Palestinian leader Yasser Arafat was poisoned to death in 2004 with radioactive polonium, his widow Suha said on Wednesday after receiving the results of Swiss forensic tests on her husband’s corpse.

“We are revealing a real crime, a political assassination,” she told Reuters in Paris.

A team of experts, including from Lausanne University Hospital’s Institute of Radiation Physics, opened Arafat’s grave in the West Bank city of Ramallah last November, and took samples from his body to seek evidence of alleged poisoning.

“This has confirmed all our doubts,” said Suha Arafat after the Swiss forensic team handed over its report to her lawyers and Palestinian officials in Geneva on Tuesday. “It is scientifically proved that he didn’t die a natural death and we have scientific proof that this man was killed.”

She did not accuse any country or person, and acknowledged that the historic leader of the Palestine Liberation Organization had many enemies, although she noted that Israel had branded him an obstacle to peace.

She told Reuters the polonium must have been administered by someone “in his close circle” because experts had told her the poison would have been put in his coffee, tea or water.

“I’m so angry at what happened and I feel that I’m mourning him all over again. This was an act by cowards.”

Arafat signed the 1993 Oslo interim peace accords with Israel and led a subsequent uprising after the failure of talks in 2000 on a comprehensive agreement.

Allegations of foul play surfaced immediately. Arafat had foes among his own people, but many Palestinians pointed the finger at Israel, which had besieged him in his Ramallah headquarters for the final two and a half years of his life.

“President Arafat passed away as a victim of an organised terrorist assassination perpetrated by a state, that is Israel, which was looking to get rid of him,” Wasel Abu Yousef, member of the executive committee of the Palestine Liberation Organization, said in a statement on Wednesday.

“The publishing of the results by the Swiss institute confirms his poisoning by polonium and this means that Israel carried it out.”

The Israeli government has denied any role in his death, noting that he was 75 years old and had an unhealthy lifestyle.

“This is more soap opera than science, it is the latest episode in the soap in which Suha opposes Arafat’s successors,”

Investigations into his demise amounted to “a highly superficial attempt to determine a cause of death.”

An investigation by the Qatar-based Al Jazeera television news channel first reported last year that traces of polonium-210 were found on personal effects of Arafat given to his widow by the French military hospital where he died.

That led French prosecutors to open an investigation for suspected murder in August 2012 at the request of Suha Arafat. Forensic experts from Switzerland, Russia and France all took samples from his corpse for testing after the Palestinian Authority agreed to open his mausoleum.

The head of the Russian forensics institute, Vladimir Uiba, was quoted by the Interfax news agency last month as saying no trace of polonium had been found on the body specimens examined in Moscow, but his Federal Medico-Biological Agency later denied he had made any official comment on its findings.

The French pathologists have not reported their conclusions publicly or shared any findings with Suha Arafat’s legal team. A spokeswoman for the French prosecutor’s office said the investigating magistrates had received no expert reports so far.

One of her lawyers said the Swiss institute’s report would be translated from English into French and handed over to the three magistrates who are investigating the case.

Professor David Barclay, a British forensic scientist retained by Al Jazeera to interpret the results of the Swiss tests, said the findings from Arafat’s body confirmed last year’s results from traces of bodily fluids on his underwear, toothbrush and clothing.

“In my opinion, it is absolutely certain that the cause of his illness was polonium poisoning,” Barclay told Reuters. “The levels present in him are sufficient to have caused death.

“What we have got is the smoking gun – the thing that caused his illness and was given to him with malice.”

The Swiss scientists’ report, posted in full on Al Jazeera’s website, was more cautious. It concluded: “Taking into account the analytical limitations aforementioned, mostly time lapse since death and the nature and quality of the specimens, the results moderately support the proposition that the death was the consequence of poisoning with polonium-210.”

Al Jazeera said the levels of polonium found in Arafat’s ribs, pelvis and in soil that absorbed his remains were at least 18 times higher than normal.

The same radioactive substance was slipped into a cup of tea in a London hotel to kill defecting Russian spy Alexander Litvinenko in 2006. From his deathbed, Litvinenko accused Russian President Vladimir Putin of ordering his murder.

Barclay said the type of polonium discovered in Arafat’s body must have been manufactured in a nuclear reactor.

While many countries could have been the source, someone in Arafat’s immediate entourage must have slipped a miniscule dose of the deadly isotope probably as a powder into his drink, food, eye drops or toothpaste, he said.

Arafat fell ill in October 2004, displaying symptoms of acute gastroenteritis with diarrhoea and vomiting. At first Palestinian officials said he was suffering from influenza.

He was flown to Paris in a French government plane but fell into a coma shortly after his arrival at the Percy military hospital in the suburb of Clamart, where he died on Nov. 11.

The official cause of death was a massive stroke but French doctors said at the time they were unable to determine the origin of his illness. No autopsy was carried out.

Barclay said no one would have thought to look for polonium as a possible poison until the Litvinenko case, which occurred two years after Arafat’s death.

Some experts have questioned whether Arafat could have died of polonium poisoning, pointing to a brief recovery during his illness that they said was not consistent with radioactive exposure. They also noted he did not lose all his hair. But Barclay said neither fact was inconsistent with the findings.

Since polonium loses 50 per cent of its radioactivity every four months, the traces in Arafat’s corpse would have faded so far as to have become untraceable if the tests had been conducted a couple of years later, the scientist said.

“A tiny amount of polonium the size of a flake of dandruff would be enough to kill 50 people if it was dissolved in water and they drank it,” he added.

The Al Jazeera investigation was spearheaded by investigative journalist Clayton Swisher, a former U.S. State Department Diplomatic Protection agent who became friendly with Arafat and was suspicious of the manner of his death.

Suha Arafat called for an investigation inside the Muqata Palestinian government headquarters and said she and her daughter, Zahwa, would pursue the case through the courts in France and elsewhere until the perpetrators were brought to justice.