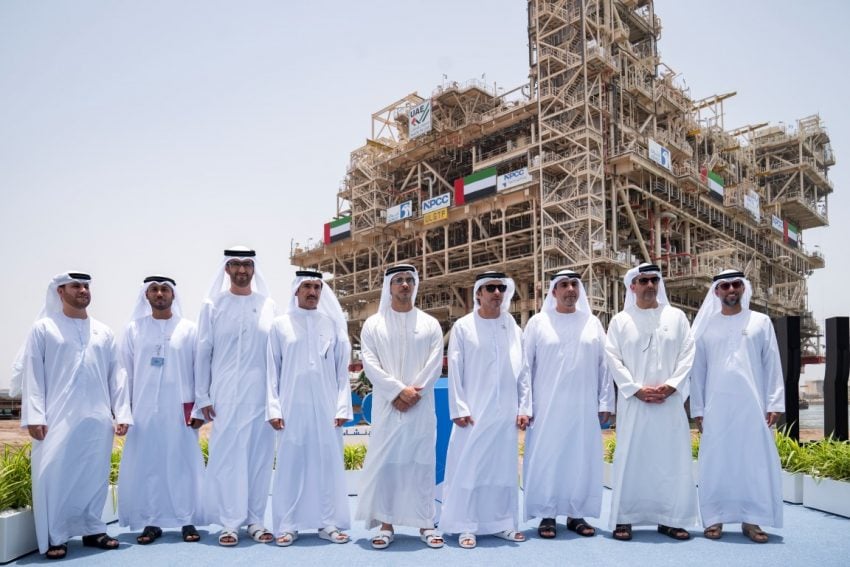 The world’s largest offshore oil platforms have been officially inaugurated after being made in the UAE by the National Petroleum Construction Company (NPCC) – a part of Senaat – for ADNOC.

ULGTP is one of five platforms fully manufactured by the NPCC at its fabrication yard in Musaffah, Abu Dhabi – part of an Engineering, Procurement and Construction (EPC) contract awarded by oil company ADNOC to NPCC, in consortium with TechnipFMC, for the Umm Lulu Package2 Full Field Development.

Weighing in at 32,000 metric tonnes, and measuring 77.7 by 83.5 metres, the ULGTP will mainly handle gas including compression, dehydration and sweetening. The field will have an oil production capacity of more than 100,000 barrels per day in 2020, supporting ADNOC’s strategy of increasing production capacity from three to five million bpd by 2030.

UAE Minister of State and CEO of ADNOC, Dr Sultan Al Jaber, said: “The completion of this key infrastructure asset marks another significant milestone for ADNOC as we drive oil production capacity towards four million barrels per day by end of 2020, delivering on our smart growth strategy and meeting increasing global demand for energy.

“In line with the guidance of the UAE’s wise Leadership, this achievement also underpins ADNOC’s critical role in enabling in-country value creation and economic diversification.

Dr Mohamed Rashed Al Hameli, Chairman of NPCC, added: “The ULGTP project is the largest to date undertaken by NPCC and was led by a team of passionate Emirati nationals committed to achieving the nation’s vision to be one of the best countries in the world in exporting energy solutions.”

The ULGTP will now set sail to the Umm Lulu Field – located in the Arabian Gulf, about 30km north-west of Abu Dhabi. After this, NPCC will undertake commissioning work, including the installation of the fixed platform. NPCC’s manufacturing yard, which spans an area of over 1.3 million square metres, is the largest in the Middle East and can fabricate up to 100,000 MT of structural steel annually.