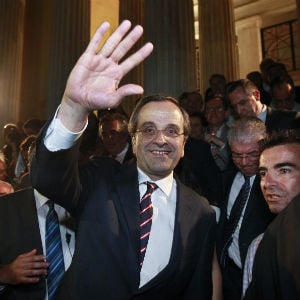 The Euro rose to a one-month high, and Asian and Australian shares gained nearly two per cent on Monday, as Greece’s pro-bailout party won the country’s elections.

The conservative New Democracy party won about 30 per cent of the vote, according to government projections, ensuring that Greece stays within the Euro area.

The leftist Syriza party had said that it would cancel the aid deal agreed in March, which could have led to the messy exit of Greece from the European Union.

“Today the Greek people expressed their will to stay anchored with the Eurozone,” said Antonis Samaras, the leader of the New Democracy party.

“We ask all political forces that share the aim of keeping the country in the Eurozone, to join a government of national unity,” he added. “The country does not have a minute to lose.”

“We salute the courage and resilience of the Greek citizens, fully aware of thesacrifices demanded from them to redress the Greek economy and build new, sustainable growth for the country.”

“We hope this election will lead to the quick formation of a new government that can make timely progress on the economic challenges facing the Greek people,” the White House said in a statement.

“As President Obama and other world leaders have said, we believe that it is in all our interests for Greece to remain in the Euro area, while respecting its commitment to reform,” it added.

“What’s happened in Greece is good news,” Rajoy told reporters in Mexico. “The Greek citizens have done the right thing. The European Union is going to help Greece, because the European Union is, and must be, a joint project that seeks the well-being and material improvement of all European citizens.”