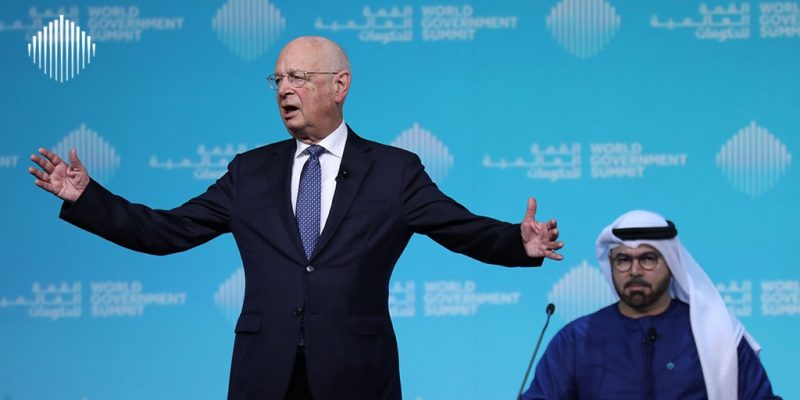 The seventh session of the World Government Summit began in Dubai on Sunday with the participation of more than 4,000 people from 140 countries.

The summit kicked off with Professor Klaus Schwab, founder and executive chairman of the World Economic Forum highlighting the the impact of “Globalisation 4.0″.

He urged global leaders and governments to address the issues posed by the fourth industrial revolution, stating that ‘Globalism 3.0’- the post-cold war period – had helped millions to get out of poverty but “left winners and losers”.

“Globalism can’t keep delivering winners and losers. Those left out want to be let back in, they won’t tolerate anything else,” he said.

“We must move away from crisis management to constructive management in the age of Globalization 4.0,” he added.

Calling the World Government Summit⁩ the World Economic Forum’s “twin”, he stressed that our world is an interconnected and interdependent system.

Talking about climate change, he said: “Mother nature is losing patience with us…We have 12 years to go before the changes in climate, ecology and biodiversity become irreversible.”

He added: “What do we want to leave our children and grandchildren?”

Stressing that “globalization 4.0 should be led by all stakeholders of society and not just governments” Schwab added that “innovation will be the key factor of global competitiveness, it’s no longer natural resource.”

Prof. Klaus Schwab, Founder, and Executive Chairman @wef on how 4IR will impact cities across the world. #WorldGovSummit pic.twitter.com/22t9EsYRvS

Globalization 4.0 in the words of Prof. Klaus Schwab, Founder and Executive Chairman of @wef, at the #WorldGovSummit 2019. pic.twitter.com/chsC6jv8XM

Meanwhile, Mohammed Abdullah Al Gergawi, the UAE’ minister of Cabinet Affairs and the Future also highlighted that the role of the government has “drastically evolved in the age of data.”

Drawing comparisons with corporate players, he said that Amazon spends $22bn and Google $16bn on research and development, with US businesses as a whole spending a total of $340bn on R&D.

However, global governments only spent $54bn, he said.

Gergawi also reiterated the importance of teaching children “the vital skill of creativity in this coming age of imagination”.

The World Government Summit, which runs from February 10-12, includes 600 speakers ranging from heads of states, leaders and delegates and 30 international organisations.