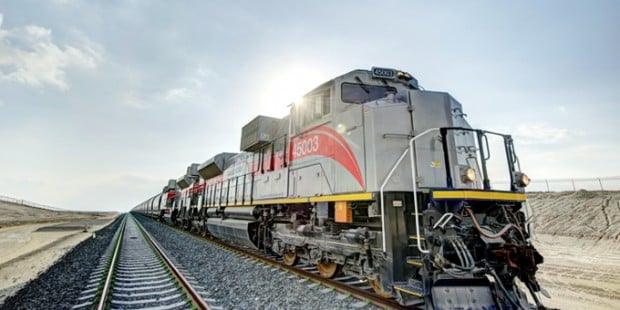 Work is well underway on a rail network that will stretch across the UAE.

Dubai Crown Prince Sheikh Hamdan bin Mohammed bin Rashid Al Maktoum met on Sunday with Sheikh Theyab bin Mohamed bin Zayed Al Nahyan, member of the Abu Dhabi Executive Council and chair of the Board of Directors of Etihad Rail (the developer and operator of the UAE railway network), and other Etihad Rail officials at Emirates Towers in Dubai. During the meeting, they progress on the UAE’s rail network, which is set to connect all seven emirates.

The second phase of the project will connect Abu Dhabi with Dubai, at a total investment of Dhs4.4bn ($1.2bn). Overall, the planned UAE rail network will span 1,200 kilometres. It will be built in stages.

READ: UAE’s Etihad Rail to seek about $2bn in financing

While somewhat rare in the GCC, there are a few rail networks. In Saudi Arabia, for example, a train network connects several cities. More investment in rail is planned in the kingdom as part of Vision 2030 initiatives, including high-speed connections spanning the vast desert between population centres.

However, a massive fire ripped through a new high-speed rail station in Jeddah on Sunday, leaving at least five people injured. Videos posted to social media showed huge plumes of black smoke billowing out of the Haramain train station. Videos also showed firefighters – and firefighting helicopters – desperately trying to contain the blaze as at least a dozen people could be seen on the roof.

A huge fire escalated on the roof of Al-Haramain high speed train station at #Jeddah, #SaudiArabia
•
Fire fighters are working full power to deal with the situation.
•
No injuries reported. https://t.co/jbbwvQLomk

The full extent of the damage remains unknown, as does the cause of the blaze.

The Haramain station was opened last year as part of an initiative to connect the holy cities of Makkah and Madinah by rail with Jeddah.