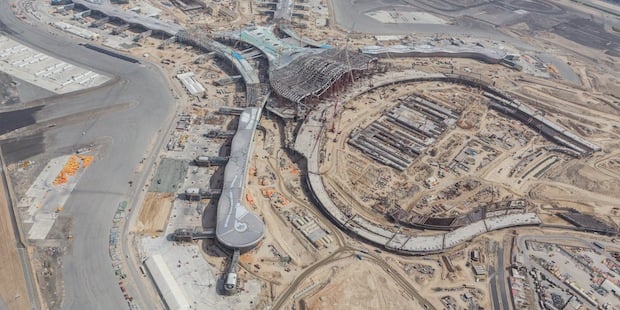 Abu Dhabi Airports has announced the completion of the final de-propping of the last arch in the roof of the new Midfield Terminal Building (MTB).

The three day long process was supported by 90 jacking points and released 8,000 tonnes of weight onto the roof in its final stage. This brought the total weight of the roof to 21,000 tonnes.

With the successful completion of the final de-propping, the structure is now fully self-supporting.

“Now that the complex process of de-propping the roof structure has been completed, the construction team has started clearing the 50 support towers under the roof, which will take them another four to five weeks,” said Abu Dhabi Airports’ chief programs officer Sulaiman Al Siksek.

“Meantime the work can now start on the exterior enveloping of the front façade and on the preparation necessary for the interior work on the central processor.” he added.

Works on the interior of the airport are believed to be underway, with the baggage-handling system near completion and the airside and car pack of the airport said to be 70 per cent complete.

In the next couple of months, Abu Dhabi Airports will focus on building the stand-alone retail units in the duty free area of the terminal.

Situated between the two runways at the Abu Dhabi International Airport, the MTB is expected to be the largest architectural structure in Abu Dhabi, visible from more than 1.5 km away.

At its widest, the roof of the structure will span 319 metres and its 18 arches, the largest of which is 180 metres wide and 5 metres high.

The new terminal is set to open next year and will support the Abu Dhabi economy by providing a lift to the aviation sector, boosting tourism in the city.

According to Abu Dhabi Airports, the number of passengers passing through the emirate is expected to surpass 45 million annually within the next decade.

In 2015, 23.3 million passengers passed through the Abu Dhabi airport, with the number predicted to increase to more than 25 million this year.