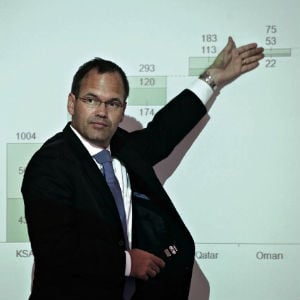 While the Wealthy in the Middle East and Africa (MEA) are forecast to grow their assets under management by 50 per cent to $6.7 trillion by 2015, the wealth managers that will benefit most from the Gulf’s high density of millionaires will be local players, according to the Boston Consulting Group (BCG).

Of the $2 trillion of assets under management for wealthy households in the Gulf in 2010, 52 per cent was held onshore, according to BCG’s 2010 Global Wealth report revealed in June.

“Over the last 10 years, the onshore part has come up five percentage points,” said Sven-Olaf Vathje, partner and managing director at BCG Middle East. Although regional investors continue to be risk-averse, the current political unrest is unlikely to alter their concentration of wealth domestically, except in countries directly hit by the turmoil, due to the strong economic story, BCG officials said.

The growth in the region’s overall wealth is in tandem with the global trend. In 2010, global assets under management grew by eight per cent to $121.8 trillion from a year earlier, surpassing the previous peak of $111.8 trillion in 2007, on the back of equity market recovery.

“That’s why you see a lot of international players suddenly setting up shop in the region because the competition is heating up for these clients,” said Vathje.

The financial crisis enabled local players to wrestle portions of the asset management pie from global competitors as the region’s wealthy repatriated offshore funds to manage liquidity when bank lending ground to a halt.

“We saw a lot of inflow of funds from offshore accounts because many of the wealthy households are also entrepreneurs and they needed funding for their businesses,” said Vathje. “Once the funds were here some of the local banks did a good job of retaining the money.”

Traditionally, regional investors tend to hold their cash and deposits locally, while allocating the management of their equity portfolios, which are mostly in international markets, to offshore operators.

Local wealth managers could also gain from the investors’ growing appetite for Gulf equities and capital-protected products, according to a BCG survey conducted about six months ago. Regional investors prefer to invest in the oil and gas, industrial manufacturing, and health and education sectors. As for their geographical focus after the Gulf, they are most keen on India and South-east Asia.

“If you look at the current portfolio, a good portion of that is managed through European private banks into European and American assets,” said Vathje. “That’s not the preference looking forward, which is to build a higher share of the portfolio into the region or tap into some of the growing emerging markets, especially on the Asian side.”