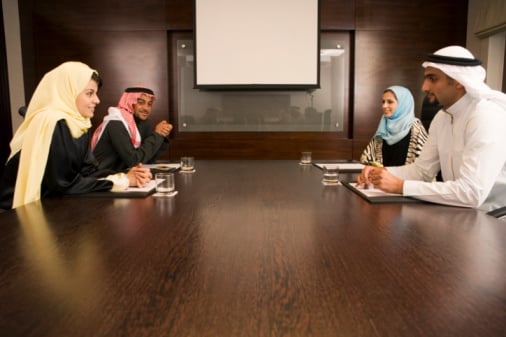 Amina al-Rustamani, a member of a prominent UAE family, raised eyebrows among friends and relatives when she started her career in Dubai 13 years ago as an electrical engineer, becoming one of few females in the Middle East to enter the profession.

Success in a male-dominated environment helped give her the confidence to rise up the career ladder and break more barriers.

She is now chief executive of TECOM Investments, part of a conglomerate owned by the ruler of Dubai which manages a complex of nine business parks and spearheads the emirate’s economic ambitions in information technology, science and education.

Almost unimaginable just a generation ago, Rustamani’s rise to the highest level of business in a Gulf Arab country underlines a shift in the business environment that is allowing the gradual entry of women into boardrooms and other positions of economic power in the region.

“There’s always this challenge to fit in and excel but once you prove that you are competent, you will earn society’s respect,” said Rustamani, who has a doctorate in electrical engineering from The George Washington University in Washington DC.

While female company directors are still a rarity in the Middle East, the region’s growing wealth, rising education standards for women and government efforts to promote more equal opportunities should help make it easier for women to crack the “glass ceiling”, or perceived discrimination against female executives, in future.

Women accounted for 9.8 per cent of corporate board seats across the world in 2011, the latest data from U.S.-based research firm GMI Ratings shows. But in the Gulf Cooperation Council – the group of six wealthy oil-exporting countries – they accounted for just 1.5 per cent, according to the Dubai-based Institute for Corporate Governance.

The gap is narrowing though. The figure of 1.5 per cent “compares to almost nil 10 years ago”, said Shailesh Dash, chief executive of Dubai-based asset management firm Al Masah Capital.

In the United Arab Emirates, the business world is unusually cosmopolitan by Gulf standards because of freewheeling Dubai.

In December 2012, Sheikh Mohamed bin Rashid Al Maktoum, UAE’s prime minister and Dubai’s ruler, issued a law obliging all government departments and related companies to have female representation on their boards, although it did not set a target date so adherence to the law is seen to be very gradual.

Fourteen per cent of senior management roles in the UAE are held by women, a study released by consultants Grant Thornton last month showed. That was below a global average of 24 per cent but above nine per cent for Japan, 10 per cent for the Netherlands and 13 per cent for Switzerland, the study found.

Conservative Saudi Arabia, by far the biggest Gulf economy, trails behind as custom is reinforced by strict Islamic law; women need the permission of a male guardian to travel abroad or open a bank account. In many companies and government departments, women and men are segregated.

But there are signs of change.

Last month Saudi Arabia’s NCB Capital, a unit of the country’s biggest bank, said it had appointed Sarah Al-Suhaimi as chief executive – the first woman to head an investment bank in the kingdom. Suhaimi was previously head of asset management at Jadwa Investment in Saudi Arabia.

Saudi Arabia’s most high-profile businesswoman, Lubna Olayan, chief executive of Riyadh-based Olayan Financing Company, which was founded by her father, was named in Fortune magazine’s 2013 list of the 50 most powerful women in business globally, a list dominated by American women.

She has called on the CEOs of companies in major Arab countries to hire and mentor women, saying that is what the region needs to develop.

Economic growth in the Gulf is one factor forcing change.

Al Masah Capital estimates that wealth personally owned by women in the Middle East as a whole hit roughly $690 billion in 2012, after growing by an average eight per cent annually in previous years, slightly faster than the increase for men.

“We are starting to see women investors taking on more responsibility, participating more in the decision-making and gaining greater knowledge and sophistication.”

Some banks, such as Dubai Islamic Bank and Emirates Islamic Bank, have established women-only branches to help them compete in their countries’ crowded retail banking markets. Their growth is creating jobs, including at senior level, which need to be filled by women.

The pool of potential women executives is still low. Globally, half of women participate in the labour force, but that number falls to about 20 percent in the Middle East, according to the International Monetary Fund.

Government policies, though, are encouraging more women to have careers as countries such as Saudi Arabia and the UAE have invested billions of dollars in improving their education systems.

In Saudi Arabia, the labour ministry and some members of the royal family are actively promoting the development of women in business, as a way to reduce social tensions caused by high unemployment among local citizens.

“What’s happening in Saudi Arabia in particular and the GCC region in general is real social and economic development, where women play a bigger and more public role in business, finance, media and many other industries,” said Princess Ameerah al-Taweel, chief executive of Saudi-based Time Entertainment Holding, a media and entertainment company.

Thousands of young Saudi women travel abroad each year to study in top U.S. and European universities at Saudi government expense. When they come home, they are less inclined than previous generations to accept lives outside the work force.

Gulf countries are a long way from boardroom quotas for women as spearheaded by Norway, where at least 40 per cent of a company’s board must now be female.

The UAE’s law requiring female representation on company boards may be only a signal of intent for now, but it does chime with a growing awareness in the business communities of the Gulf that women can play an important role as local companies seek to expand beyond their domestic borders.

For Amina al-Rustamani, the change in attitude is long overdue.

“Females add breadth and balance to every company at all levels,” she said. “They excel under pressure and can juggle multiple tasks. With enough education and the right opportunity, I believe women can become impressive leaders and role models.”