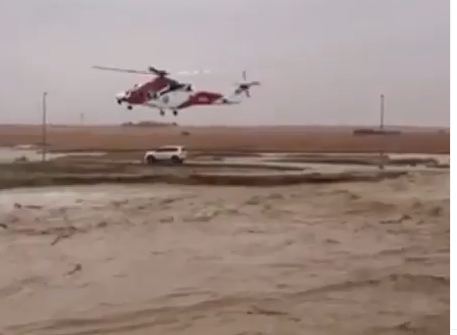 A woman was killed after she was crushed by a wall that collapsed due to the heavy showers in Ras Al Khaimah on Saturday, the police said.

The African maid was reportedly working in a house in the Al Fahlain area when the wall caved in, local media reported.

Meanwhile the RAK police has also launched a search operation to find a worker who was swept away by the floods in Waadi Shaam.

Officials said 87 patrols have been deployed across the emirate to deal with any weather-related emergencies.

The UAE has recorded its highest amount of rainfall in 24 years, the National Centre of Meteorology (NCM) said on Sunday, following two days of heavy rains accompanied by thunder and lightning.

Areas in Al Ain and RAK have been among the worst affected, with several homes flooded.

On Saturday, the National Centre for Search and Rescue (NCSR) carried out a rescue and evacuation mission for a man and his wife – both Emiratis – after their vehicle was trapped in the middle of a valley in the Al-Bateen area in Al-Ain. They were evacuated to safety.

On Saturday morning, the NCSR also airlifted two Sudanese men to safety in Wadi Ghashabah in Al Ain city after they were trapped by floods.

With rain continuing on Sunday across the country, the NCM urged people to be cautious.