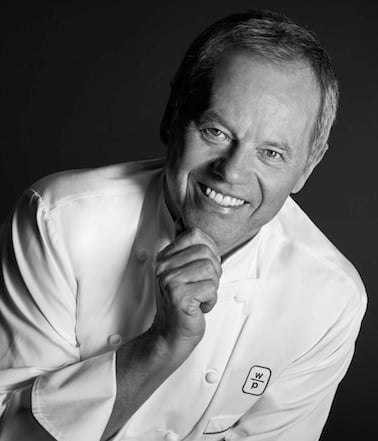 The in-demand chef is currently in Dubai on a five-day visit, accompanied by Alex Resnik, director of Operations and partner for the Wolfgang Puck Fine Dining Group, which now stretches to 13 brands.

Speaking to Business Traveller Middle East on Friday, he said the Four Seasons venues include a Cut restaurant and debut of a new brand, Re Asian Cuisine and Blue Moon Lounge, while Al Maktoum International Airport is earmarked to have the first Wolfgang Puck Bar & Grill outside the US.

“The new Dubai restaurant will be the first new design of our Bar & Grill, specifically for the airport. It’s going to be lighter, and more modern, than we used to do. The concept could be extended to other airports – it will be bright and upbeat, and we want to make it feel solid not like fast food, and it will have a bar so it will be easy for people travelling by themselves.”

He said Re Asian Cuisine will be a new version of WP24, an upscale Chinese restaurant in downtown LA.

The veteran chef has come a long way since opening Spago in Los Angeles January 1982. Today his culinary empire, spanning airport cafés and catering as well as fine-dining restaurants, employs around 5,000 people.

While most of his business remains in North America, his focus is increasingly overseas, as illustrated by his growing Gulf portfolio.

“If we have 30 or 35 restaurants, half in the US and half abroad, it’s better financially,” he said. “In Las Vegas, we have six restaurants and in the crisis our business went down by more than a third, so it made me think that if I have all my eggs in one basket, it’s a problem.”