Why smart cities are important to the UAE

I’m often asked, what really is a smart city?

While ‘smart’ may mean different things to different stakeholders, the term ‘smart city’ has come to mean widespread use of information and communications technologies (ICT) in urban governance and the promotion of economic growth.

But the question that needs to be asked is why do we need smart cities?

The answer lies in the fact that cities are growing in population. Urbanisation is increasing at a pace never before experienced. By 2030, it is estimated that the world will have 43 megacities, each with more than 10 million inhabitants.

Combined with the overall growth of the world’s population, the shift to cities will add another 2.5 billion people to urban areas by 2050, increasing the proportion of population living in urban areas from the current 55 per cent to 68 per cent.

This is why city administrators require a shift in thinking to develop and grow sustainably. We have seen countless innovative developments in this space, all of which can change the game for city leaders who are making the next wave of decisions.

Why smart cities are important to the UAE

The UAE has made great strides in developing smart cities, and the government aims to ensure sustainable development while taking care of the environment to achieve the ideal equilibrium between economic and social advancement. These concepts are further underpinned through the Dubai 2040 Plan and the Economic Vision 2030 strategy in Abu Dhabi.

Some notable projects include the Zayed Smart City Project in Abu Dhabi, which aims to manage the infrastructure by using advanced ICT and the Internet of Things (IoT), and The Sustainable City in Dubai, a car-free, mixed-use township running on indigenously produced solar energy.

To further bolster the transformation of smart cities, the Dubai government also launched an initiative that aims to centralise all its bodies into one entity, in an effort to provide advanced, comprehensive services via smart applications and devices to all citizens and residents.

Global spending on smart city technologies has grown exponentially with an estimated 22.7 per cent increase expected by 2025, according to a recent analysis from Frost & Sullivan. Smart cities actively promote the extensive collection and analysis of data in order to make cities more efficient and, presumably, more equitable.

Benefits of a smart city

The benefits of a smart city are plenty but let me focus on three that I think are critical to building the cities of the future.

The first advantage is increased economic benefits. An advanced digital payments ecosystem – a key feature of smart cities – points to an opportunity for countries to increase GDP by growing a digital payments economy whose benefits include access to jobs, more robust commercial activity, streamlined business loans, and the reduced cost of operating cash. 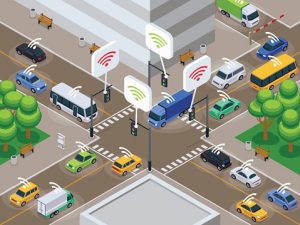 The second is improved demand-based and energy-efficient multimodal transportation. Residents in smart cities see huge improvements in transportation systems. Connected and data-based transportation infrastructure is far more efficient and intelligent than the alternative. Urban mobility has evolved from owning and driving cars to seamless multi-modal transportation, coupled with the development of tech startups that simplify trip planning via one-ticket issuance and invisible and seamless digital payments, among others.

We will continue to see new innovations building on the opportunities of IoT and autonomous vehicles. This will allow development of connected, sustainable and energy-efficient cities with seamless experiences for riders. In fact, ‘The Line’ development in Saudi Arabia aims to have no cars, but only AI-enabled micro-mobility services with no traffic congestion and an urban environment in which 95 per cent of nature will be protected. All of which will be powered through the 100 per cent renewable Neom grid.

The third is data-driven decisions. Because smart cities are entirely connected, businesses and government entities can make smarter choices rooted in data. Open data enables everyone to see how individual decisions play a part in the overall infrastructure. It also allows them to monitor this data in real time, which empowers them to strengthen operations over time. For instance, this data can connect police departments to the most high-risk areas for more proactive community policing.

With livability as a key criterion, the concept of making cities smarter with the use of digital payments, global positioning systems, and other technologies to transform government services, transit, traffic management, parking and building access is interconnected with the development of payments technology and regulation.

At Mastercard, we are helping to drive this progress by embedding ourselves with private and public sector partners, supporting them in the development of digital payments economy blueprints and executing on it by leveraging our advanced technologies, global payments network and expertise, advisory team and data driven insights. Throughout the pandemic, we have supported our partners and united communities, ensuring governments, large and small businesses, merchants and consumers stay safe, informed and connected.

The Mastercard white paper Building the Cities of the Future found that despite the challenges of the past year, hope is on the horizon. Over half (54 per cent) of respondents in the UAE surveyed as part of the study believed the Covid-19 pandemic will accelerate the development of smart cities. The overall sentiment was positive, with a view that innovation, optimism, and collaboration will contribute to the thoughtful evolution of smart cities.