For many in the Gulf aviation industry the current period of low oil prices and global volatility has created its own set of challenges.

Reduced corporate demand, travel restrictions and other hurdles have led to job losses, hiring freezes and route cuts for airlines operating in the region in recent months, with US restrictions on large electronics only adding to their misery.

But for François Boutellier, CEO of low cost Omani carrier SalamAir, there has been arguably no better time to enter the market.

“It’s the best time to do it in fact,” he says. “Companies and governments are all looking into savings, the Oman budget has been reduced so they are very interested at all levels to actually reduce their expenses in terms of travel and we are here to offer alternatives, good timings and very competitive fares.”

Since launching at the end of January, with its maiden flight between the southern city of Salalah and Omani capital Muscat, SalamAir has sought to craft its own niche in a regional market with already heavy carrier representation.

In February it launched twice-daily flights from Muscat to Dubai World Central and in April it began flights to Jeddah, with other locations including Karachi, Sialkot and Multan in Pakistan and Madinah and Taif in Saudi Arabia also on the horizon.

“Some routes are performing better than others but the domestic market is doing very well and the opening of Saudi has been really promising, with good load factors and a real interest in the market.

“For us there is a shift in terms of flights in order to better accommodate demand for Ramadan, so we’ll have more flights to Saudi and we’ll open Taif as well as an additional Saudi destination, and we’ll serve more the domestic market,” he says.

SalamAir’s arrival comes amid winds of change in the regional aviation market as low cost carriers disrupt the status quo.

This, as in Europe and the US, is expected to have a direct impact on profitability, with Middle East airlines forecast to see combined profits fall to $300m this year from $900m in 2016 due to high capacity and limited demand growth, according to IATA. 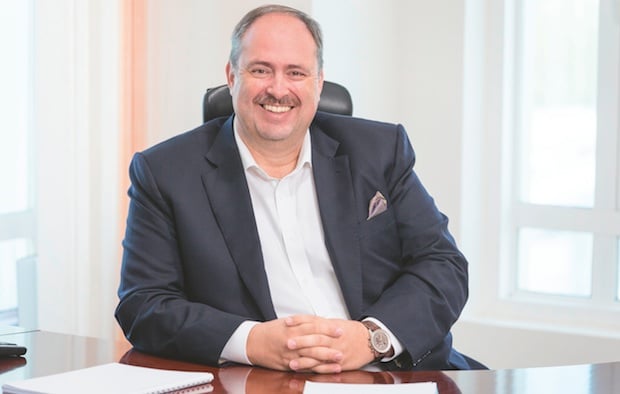 Yet despite these predictions, Boutellier argues that low cost carrier business need not be at the expense of traditional rivals and he suggests, for SalamAir at least, the focus will remain on largely short haul routes within three hours.

“What you see in most of the markets is an incremental business rather than cannibalising from others, and the competition is always healthy. It just gives you the ability to stimulate the market and we see that in all the markets we are operating in across the segment.”

However, one area he believes does need more attention is the understanding of what low cost means in a region where low price is often associated with poor quality.
Indeed, more established regional rival flydubai has sought to lose the low cost carrier tag altogether through the introduction of its business class offering and other services to pursue new revenue streams.

“There is nothing wrong in markets where people understand the concept of low cost,” says Boutellier.

“A lot of people when they see you are low cost because you have very cheap tickets [they believe] maybe you’re not doing your maintenance or are not safe, maybe you have older planes which is absolutely not true. If you look at all the low cost carriers it’s actually the very opposite.

“The market doesn’t necessarily understand the distinction and I think this is why they [flydubai] want to move away from that labelling.”

Instead Boutellier suggests the term budget carrier is more appropriate and he says the airline has tailored its offering based around this concept with different fares based on flexibility and baggage requirements.

In the context of SalamAir’s home market of Oman, the CEO believes this distinction could be key in the months ahead following a decision by the government to quadruple the cost of tourist visas.

Oman Police announced in April that tourists would now be required to purchase a short stay visa for OMR20 ($52) from the previous OMR5 ($13), significantly increasing the cost of visiting the country.

While Boutellier believes the increase will have some impact on those considering a short holiday in the country, he also argues it provides “another good reason” for flying low cost.

The CEO will be hoping these predictions prove right as the carrier begins its baby steps to profitability.

Also that year, SalamAir will add to its fleet of three Airbus A320s leased from Chile’s LATAM Airlines with an additional two or three aircraft in anticipation of a 40 per cent increase in Oman’s air traffic demand by 2019 forecast by its state-run parent Muscat National Development and Investment Company (Asaas).

And as we close our interview, Boutellier is keen to emphasise that the outlook for future regional travel demand is positive despite the current turbulence impacting carriers.

“Despite new technology like Skype or video conferencing people still travel and they actually travel more than they used to,” he says. “The development of LCCs contributes to this factor and is expected to take a big chunk of intra GCC market growth.”