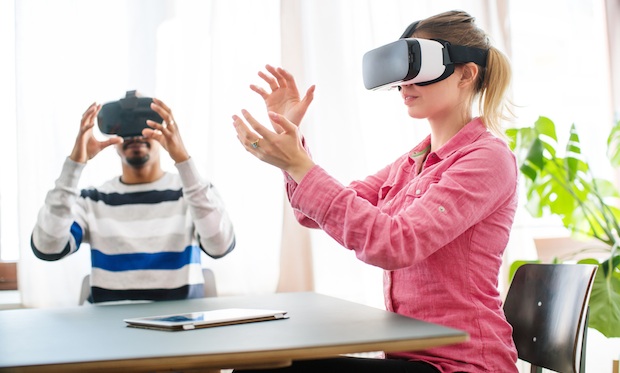 Hype around virtual reality has increased over the past few years, especially with tech giants Facebook, Google and HTC investing much more heavily in the technology.

The world has definitely set its eyes on it; in 2016 there has been increased attention surrounding all things VR-related and the technology has drawn interest from all corners, including the business community.

The growth of the VR industry in the region has been stimulated by an increased pressure on businesses to reduce operational costs due to the drop in oil prices, as well as other drivers.

Falling acquisition costs and increased accessibility to VR technologies have also contributed to the growth of the blossoming industry.

The barriers to enter the VR market have decreased as the new technology infiltrates mass global markets, and its evolution has triggered a global race to identify and capitalise on the next major market opportunities.

The value of venture capital investments in VR has hit $3.5bn in the last two years alone, according to Goldman Sachs, while an International Date Corporation report suggests that augmented reality and VR hardware revenue will top $2bn globally for the first time this year. Projections show that device shipments are set to grow 11-fold to 110 million by 2020 and Deloitte estimates that most revenue in the Middle East from VR devices and services in 2016 will continue to be driven by video games. These currently account for around $1.5bn – a figure forecasted to grow threefold by 2020, the majority of which will come from the Gulf region.

Gaming is not the only industry attracting investment for VR. Companies in GCC countries are beginning to sell commercial enterprise VR solutions and incorporating VR solutions to help sell their products and services in several industries.

As it becomes more affordable they are eager to adopt VR to streamline processes and support the lives of their employees, while universities and research institutions are studying ways to improve the lives of students and the general population.

However, there is still a perception that VR is solely relevant for video games – a myth that has been exacerbated by the recent rise in popularity of Pokemon Go, which also features augmented reality. This is an unfortunate misconception as VR already supports a number of business applications in multiple industries from virtual tours in the travel and real estate industry, to virtual conferencing, professional development and immersive learning in education.

Some travel brands – especially those at the premium end – have shied away from digital channels as they were perceived to predominantly attract price conscious buyers and comparison shoppers.

But with the advent of immersive technologies, such as 360-degree video and augmented and virtual reality, digital is redefining the inspiration and discovery part of the travel journey. It is increasingly providing an opportunity for premium travel brands to differentiate and demonstrate all the distinctive features of their product and service, thus justifying the price premium that the users pay.

Ivan Jakovljevic, Google’s head of travel, finance and government for MENA predicts that “more travel companies will jump on the bandwagon using the technology to better tell story of their brand”.

Indeed, Google sees a huge potential for VR to change the way people in the region travel and explore the world.

“Google has always been about accessibility and that is the approach we are taking with VR,” he adds.

Businesses are required to quickly adapt to the demand for VR. A growing number of companies in the GCC’s tourism industry are embracing VR as a key part of their marketing and some are leading the way in their respective industries on a global scale.

Dubai’s Jumeirah, for example, developed an innovative digital platform in partnership with Google that uses 360-degree video, 3D sound, playful interactions and exclusive hotspots to bring to life Jumeirah’s 23 properties around the world. Jumeirah Inside uses Google Cardboard to create a fully immersive VR experience and also integrates the discovery and booking portions of the user journey with a booking engine directly inside the platform. This enables companies to inspire and entertain consumers as they book their stay.

A report by Frost & Sullivan also highlights a number of cutting-edge initiatives being developed across the region. For example, the Sheikh Zayed Housing Programme – that provides housing for Emirati famies – launched the My Virtual Home App, which uses AR to allow users to virtually tour ready-made 3D housing models. Real estate developers are utilising VR to create virtual walkthroughs of their properties, giving ‘property hunting’ an immersive experience.

Stefan Pernar, managing director at Virtual Reality Ventures, says: “VR applications have been an easy sell for the real estate industry since it allows walking through off-the-plan developments and remote viewings of properties also by international buyers. That is why we have seen an almost instant adoption of VR technology by property developers and large online property sites.”

The aviation and transportation industries have also embraced VR as part of their marketing efforts. Etihad Airways launched a VR movie starring Hollywood superstar Nicole Kidman to introduce its award winning service. The five-minute film gave users full sensory interaction with various aspects of Etihad’s product in a first for the industry. Google Cardboard and Oculus Rift were used as platforms.

The United Arab Emirates is undoubtedly running head-to-head with the rest of the world when it comes to VR. The Telecommunications Regulatory Authority, for example, has its own VR tourism app (UAE VR) to give users a firsthand experience of the Sheikh Zayed Grand Mosque in Abu Dhabi. The Dubai Road and Transport Authority (RTA) has also launched Wojhati – a trip planning mobile app with GPS to help users plan, track, and share their mass transit route, which has been enhanced with VR as its feature nurtures an interactive environment based on emulating AR.

Virtual reality has also moved into the realm of professional development. Professors and students have embraced the increasing benefit from immersive experiences inside the classroom, and VR apps are changing how universities communicate with people outside the campus.

Graduate affairs departments can use it to recruit new students while professors use it to better disseminate research results at conferences and engage with students. For example, with a Google Expeditions kit, teachers have everything they need to take their class on virtual reality tours. The kit includes a tablet, Google Cardboard VR viewers, phones and a router to connect all them together. ENGAGE is another free to use education platform that seeks to transform how people share ideas and teach lessons to each other globally by harnessing the power of VR technologies.

VR is also being increasingly used by researchers in laboratories. The region hosts one of the biggest Cave Automatic Virtual Environments in the world at King Abdullah University of Science and Technology.

“I manage a four sided CAVE for teaching, research and workshops and several universities in Qatar and all over the region have invested in amazing VR systems,” he says.

Universities also carry the responsibility of educating the general public through research, and setting standards for the use of the technology by businesses.

The broad demand for immersive analytics, for instance, highlights the need for a framework or some standardised platforms for VR analytics. By using data, companies and users could take advantage of the greater space on offer, generate more natural interactions, and analyse multi-dimensional data in a visceral way.

Jeremy Dalton, an innovation consultant at PwC, argues: “VR is not changing the need for data analytics – this will continue to be a necessity with or without VR – but VR has the ability to augment it.

“As the world churns out more and more data we need to consider how we’re going to analyse all of this ‘big data’. This is what will drive demand in the market for a more immersive and effective form of analytics through VR”.

Whichever direction these analytics take us, it’s safe to say that VR will play a leading role as it becomes an increasingly influential presence across the region’s business landscape.