Why Emma Gilmour has become a pathbreaker for women in motorsport

Burning fuel, shredding tyres, wrecking cars, tons of carbon emissions emitted while moving those vehicles, teams and spectators from one destination to the next – and then repeating it all over again. The nature of international motorsport competitions is inherently damaging from an environmental standpoint.

So, when Extreme E, a new series that puts sustainability – as well as gender equality – at the centre of the conversation debuted last year, it naturally stole the spotlight.

The inaugural season of the Fédération Internationale de l’Automobile (FIA)-sanctioned electric off-road racing series kicked off last year with full attention from the pinnacle of motorsport – F1 itself. Among the 10 teams competing in the second season that began earlier this year in Saudi Arabia is X44, a team founded by seven-time F1 world champion Lewis Hamilton. In the 2021 season, X44 finished in second place behind X Racing, a team established by former Formula 1 world champion Nico Rosberg.

Cementing the championship’s reputation even further was when McLaren Racing decided to participate in the second season. McLaren’s entry was a thumping vote of confidence for Extreme E.

To participate though, there has to be one male and one female driver on each team who have equal driving duties. To fulfil this criterion McLaren Racing signed on its first-ever female driver in its nearly six-decade history – Emma Gilmour from New Zealand. “I’ll never forget the moment [when they contacted me]. It was an email from [the CEO of McLaren Racing] Zak Brown saying he wanted to speak with me. Initially, I thought it was just a scam email, but then I looked at the footer and realised it was not. At the time I didn’t quite recognise that I would be the first female [driver signed onto McLaren]. Because I never dreamed of being an F1 driver, I never dreamed of driving for McLaren,” says Gilmour. 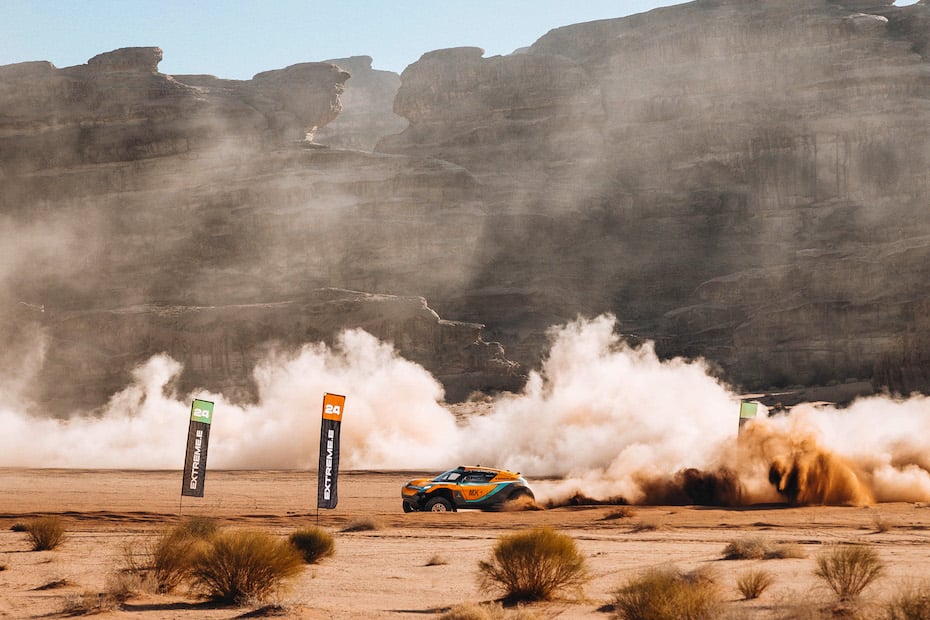 To be clear, it wasn’t gender that landed her the coveted role. It was Gilmour’s talent – and none of the naked nepotism or blinding commercial pulls that sometimes aid drivers to bag a seat in top motorsport competitions such as F1 – that earned her a place on McLaren’s Extreme E team. Her career highlights include winning the FIA Women in Motorsport and Qatar Motor and Motorcycle Federation Cross Country Selection in 2015. She also became the first woman to win a round of the New Zealand Rally Championship (NZRC), claiming victory at the 2016 Rally of Canterbury.

Poignantly, Gilmour shares her nationality with Bruce McLaren. The number 58 on McLaren’s Extreme E car is a throwback to the number used in the first race that Bruce entered in 1952 while driving his father’s Austin 7 at the Muriwai Hillclimb in New Zealand.

The new Extreme E spec car that Gilmour and her teammate drive is a fully-electric 2.3m wide SUV that weighs 1,780kg. It’s powered by a 54kWh battery that produces a maximum power output of 630hp and can propel the car from 0-100kph in under five seconds up a 50-degree incline. The vehicles are charged by hydrogen fuel cells. AFC Energy uses solar power and water to generate hydrogen that fuels the generator. “It’s a brand-new kind of motorsport. They haven’t taken an existing form of motorsport, electrified it and made it 50- 50 male and female driving ratio,” explains Gilmour of the positioning of the new series. “We’re going to remote locations that would never see live sport, generally speaking, and whilst we’re there, we’re educating people about what is happening there with regards to climate change and environmental damage.”

The inaugural race of the 2022 season began last month with Desert X-Prix in Saudi Arabia’s Neom area. It will be followed by the Island X-Prix that returns to Sardinia in May, followed by the Ocean X-Prix in July which will be held either in Scotland or Senegal. Thereafter, the action heads to Antofagasta, northern Chile for the Copper X-Prix, followed by the season finale in November at the Energy X-Prix at Punta del Este, Uruguay.

To minimise the carbon footprint of the races, all the cargo travels onboard the 6,700 tonne, 105m St Helena, a former Royal Mail Ship which was launched in 1989, and has now been refitted to act as Extreme E’s floating paddock. Importantly, St Helena also acts as a floating laboratory. The swimming pool aboard the ship has been converted into a laboratory where scientists can study environmental issues at the destinations where it sails to. The carbon footprint of the first series was clocked at 8,870 tonnes CO2e (carbon dioxide equivalent) which was completely offset by investing in environmental certificates for a wind farm in Patagonia. By the end of the first season, the inaugural series became carbon neutral.

Also, team sizes have been restricted to seven: two drivers, one engineer and four mechanics, and no live spectators are present to further reduce carbon emissions resulting from travel. Gilmour’s teammate is Tanner Foust – who won the Global Rallycross Championship twice and is also a four-time and current US rallycross champion.

“Tanner and I were able to test together for a small period at the end of last year. As part of the Extreme E messaging, we’re not doing countless miles and we aren’t tearing up vehicles. We’re very limited in the mileage that we get to do in the vehicle. Tanner is a great teammate and is big on rallycross and drifting. He’s got a wealth of experience that he shares with me,” observes Gilmour. 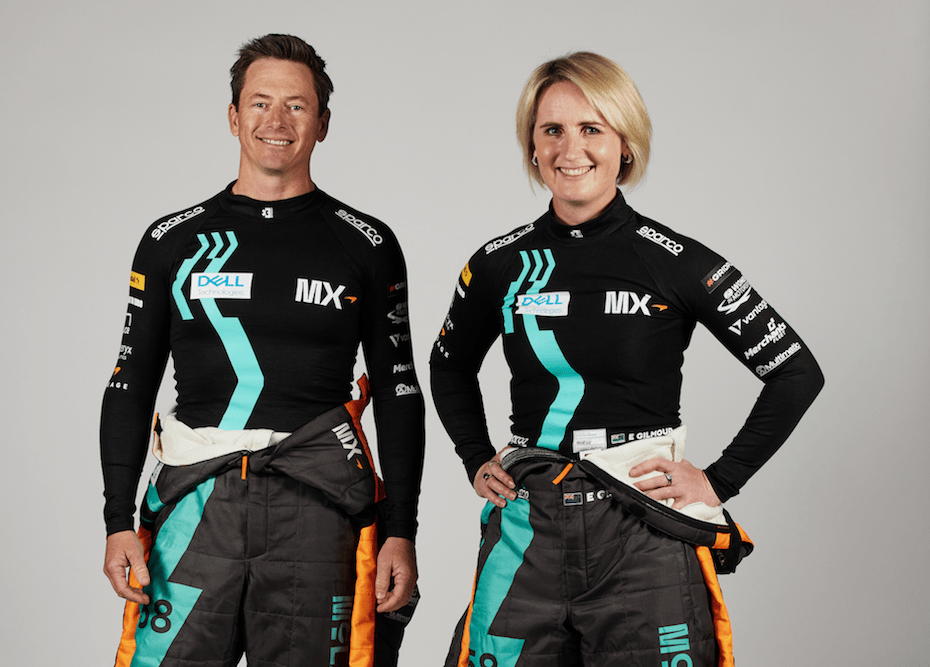 Gilmour studied design at university and ended up with a Bachelor of Arts degree in philosophy and history – which makes us wonder at what point racing became Plan A for the Kiwi? Initially, Gilmour says, she was a co-driver for a friend who was rallying, but soon discovered that she too had the natural ability to drive really fast. “It became my Plan A because the people around me at the time encouraged me to pursue [racing as a] career.” Racing though is an expensive sport, with the cost of entry being a big barrier to many who want to compete. “The hardest thing within motorsport is the cost of it. It’s such an expensive sport and the whole goal was to get sponsorship so that I could keep funding myself.

“To be a driver there’s going to have to be money involved at some stage. I was very lucky in that my dad and my brother-in-law were mechanics so they could help with my costs initially by helping me work on the vehicle. Now, at the level that I am competing at in New Zealand, the cost of paying someone to work on my car takes a lot of my sponsorship dollars,” says Gilmour.

She is well aware of her accomplishment reaching the highest rungs of motorsport in McLaren, but she also forces the conversation to extend beyond gender diversity, citing F1 as an example. “F1 is an incredibly tough sport to get into, regardless of gender. There are so many other things that come into play including money, opportunity and timing. There is a lot of female talent out there and that talent pool is growing. We just need to keep feeding that talent pool so that the odds of [women competing] increases,” notes Gilmour.

Gilmour makes a case for women to looks at other avenues of motorsport, beyond just the driver’s seat. “There’s many areas of motorsport that women can take part in such as engineering. Obviously, they don’t have the spotlight shone on them the same way as drivers, but there are a lot more doors opening up for women,” she says. A case in point is sisters Teena and Leena Gade are McLaren’s Extreme E’s performance and race engineer respectively. 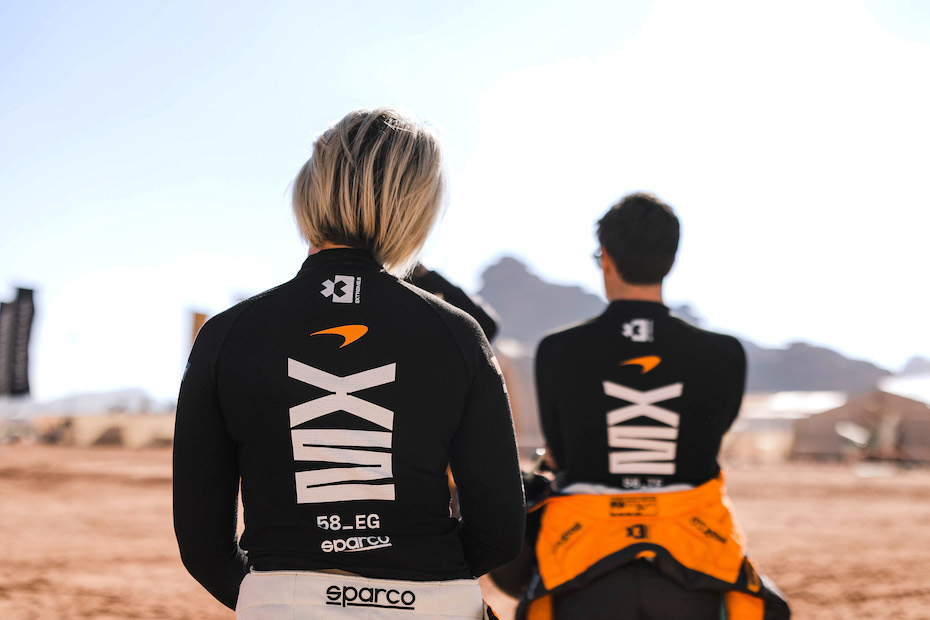 With McLaren placed fifth in the championship after the Neom race, the team has everything to play for in the remaining four races. Gilmour’s sheer thrill at being associated with McLaren and Extreme E is palpable. “In no other sport do you have women and men competing in the same equipment and on the same platform. That’s gives the next generation of girls something to aim for. It’s an amazing buzz to be representing a brand like McLaren in a series like Extreme E where you’re flying the flag for women in sport and being the role model for what is possible through never giving up on a dream.”

Cisco signs as an official technology partner of McLaren Racing