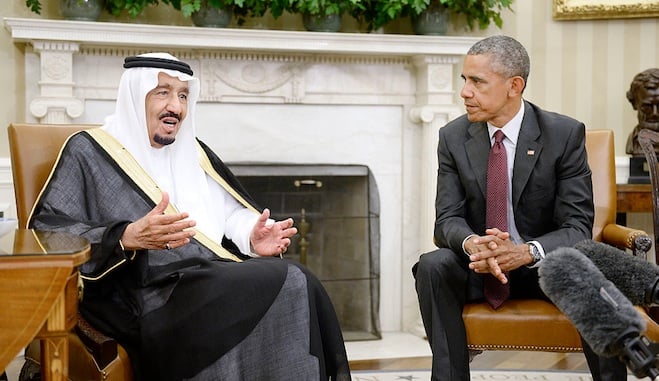 The White House expressed confidence on Monday that Saudi Arabia would not follow through on a reported threat to sell U.S. assets if Congress passed a bill that could hold the kingdom responsible for any role in al Qaeda’s Sept. 11, 2001 attacks.

The New York Times reported on Friday that Saudi foreign minister Adel al-Jubeir told U.S. lawmakers that the country would be forced to sell up to $750bn in Treasury securities and other U.S. assets in response to the bill if it passed.

White House spokesman Josh Earnest said President Barack Obama did not support the legislation and would not sign it. The bill would allow the Saudi government to be sued in a U.S. court for any role in the Sept. 11 attacks.

“I’m confident that the Saudis recognize, just as much as we do, our shared interest in preserving the stability of the global financial system,” Earnest told reporters.

Obama, who is traveling to Saudi Arabia later this week, said he opposes the bill because it could expose the United States to lawsuits from citizens of other countries.

Most of the 19 attackers on Sept. 11, 2001 were Saudi nationals who hijacked four planes and flew them into New York City’s World Trade Center, the Pentagon near Washington and into a field in Pennsylvania after passengers revolted.

The attack was mounted by the al Qaeda militant group, then based in Afghanistan. No U.S. investigation to date has reported finding evidence of Saudi government support for the attacks.

The debate over the congressional legislation has gained traction on the U.S. presidential campaign trail. Former Secretary of State Hillary Clinton, the front-runner for the Democratic nomination, has broken with the Democratic administration and said she supported the bill.

Her rival, U.S. Senator Bernie Sanders of Vermont, said he shared the Obama administration’s concern that the legislation could open up the United States to liability from other countries but said it was important to look into any potential Saudi role in the attacks.

“I think it’s important to have a full investigation and an understanding of the role, the possible role, of the Saudi government in 9/11,” he said on NBC‘s “Today” program.

Clinton and Sanders’ remarks on the issue on Monday came on the day before New York state’s Democratic primary, a crucial race for both candidates.

Businessman Donald Trump, the Republican frontrunner in the race for the White House, dismissed concerns about a Saudi sell-off of U.S. assets.

The bill, which has 22 co-sponsors, passed the Senate Judiciary Committee in January, but it has not come up for a vote in the Republican-dominated Senate. Senate Majority Leader Mitch McConnell’s office said on Monday that no vote has been scheduled.

Family members of victims who were killed in the September 2001 attacks urged Obama to support the legislation and to bring up the issue on his trip.

“It is not acceptable … to succumb to the demands of a foreign government that we abandon principles of American justice while we pursue our diplomatic goals,” they wrote in a letter to Obama that was released to the media.

In September, a U.S. judge dismissed claims against Saudi Arabia by families of victims of the attacks, saying the kingdom had sovereign immunity from damage claims.