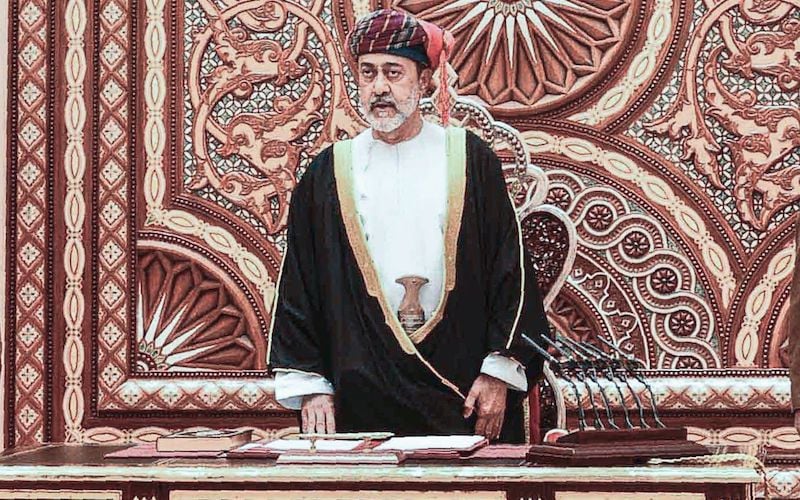 Debonair and benign, Oman’s long-term leader Sultan Qaboos died on January 10, 2020 at the age of 79. Despite an arcane succession plan involving sealed letters in secret locations, Haitham bin Tariq Al Said was sworn into power hours later in a closely choreographed ceremony designed to confer as much of the previous Sultan’s authority onto his cousin as possible.

The sultanate is observing 40 days of mourning, which will extend until the middle of February. Government business has mostly paused, and one can imagine that Haitham Al Said is discretely using this lull to consolidate power, and reassure allies. Former British ambassador to Oman, Robert Alston notes that his first speech stressed a commitment “to continuity both domestically and internationally”.

“We will follow the path of the late Sultan,” Haitham said, promising to “promote peaceful solutions” to regional and global crises.

Haitham Al Said is widely perceived as a safe pair of hands. Sophisticated, bright, measured and quiet, he has worked in the government for decades, serving in the ministry of Foreign Affairs, and latterly as minister of Culture. He has also been instrumental in creating ‘Oman 2040’, the strategic plan for the country’s economic future.

“Reform is inevitable,” according to Oman’s minister of Commerce and Industry, Ali Al Sunaidy, who pulls no punches when it comes to his country’s economic position. In an interview at the World Economic Forum in Davos in January, he said: “When the oil prices crashed in 2014, our GDP dropped tremendously, from about OMR30bn to OMR26bn. Thank god we are now back at OMR30bn, so now we need to get into economic reform to allow the youth and the private sector to carry the future.”

One of the new Sultan’s challenges will be to create jobs for Oman’s generation Z. There are more than two million foreign workers in the country, but the young Omani workforce is either unwilling or unable to do the jobs available. Half of the 19 to 25-year-olds are already unemployed, and Oman has one of the youngest populations in the world; 46 per cent are under 19.

This worries Murtadha Hassan Ali, who serves as chairman of the Economic Committee for both the government’s Council of State, and the elected Consultative Assembly. “The economy at its present speed is not able to create additional jobs… The youth could be turned into a wave of anger, creating instability.”

The country has seen protests in the past. During the Arab Spring of 2011, Omanis took to the streets in the port city of Sohar. The Sultan responded quickly, offering a sop of unemployment benefits, job creation, and student scholarships. Since then, the public sector has soaked up thousands of unemployed Omanis, but productivity is very poor. Meanwhile, Oman’s debt to GDP has spiked from around 15 per cent in 2015, to about 60 per cent in 2019, and could reach to 70 per cent by 2022, according to S&P Global Ratings.

“Most of these debts are for consumption purposes, mostly to pay the salaries of government employees,” said Hassan Ali. “To meet the deficit, we are also withdrawing from our reserves. All this shall continue in the coming years, unless we find other resources for revenues.”

All countries which are commodity dependent traditionally have difficulties balancing their economies through diversification, and Oman is no exception. The challenge is whether they can become globally competitive with non-energy products, and this issue is yet to be resolved.

Hassan Ali pinpoints several areas ripe for development. “Renewable energy is an important economic opportunity, as is mining. Oman could have large deposits of metals including gold and various minerals. Tourism is a serious opportunity for wealth and job creation.”

The sultanate’s government is prioritising significant investment into the logistics sector, something minister Al Sunaidy was keen to emphasise at Davos. “We have spent $3bn on five airports, $6bn on roads, and we have three major ports outside the Strait of Hormuz.”

In 2016, the Omani government set up the ASYAD Group to bring all 16 government logistics companies and JVs under one entity, with the aim of improving performance and offering economies of scale. Its operations include the deep water ports of Suhour, Salala and Duqum, free zones, a global shipping line, a new economic city, a dry dock, the national ferry company and the sultanate’s postal service.

Reforms like this are beginning to bear fruit. The country’s ranking in the World Global Logistics Performance index has jumped 16 places. Last year, a phalanx of new laws on foreign capital and public private partnerships were introduced, and the sultanate received a high amount of foreign investment.

Capitalising on Oman’s strategic position as ‘the Switzerland of the Middle East’ could be another answer to the government’s economic woes.

“The UK’s relationship [with the sultanate] is extraordinarily close,” explains Alston. “They are [close] at government level, at defence level, and at business level. Statistically, the UK is the biggest source of foreign investment. The Omanis are looking to see whether there are other sectors from which British investment might come, and that will continue to be an important process going forward.”