What to expect at Cityscape 2015 in Dubai - Gulf Business 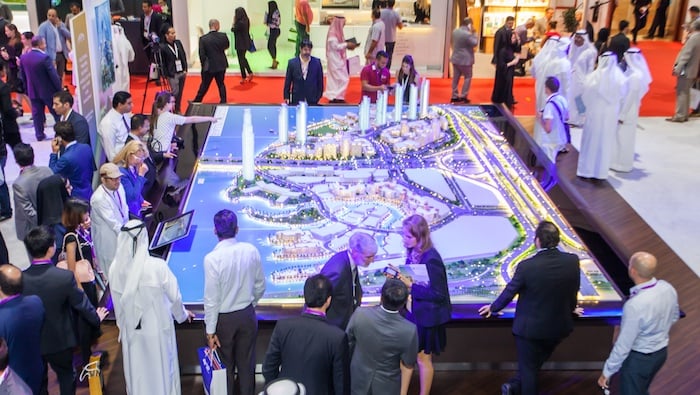 In stark contrast, during 2009 and 2010, the mood at the three-day exhibition was somber, with fewer attendees and smaller displays.

By 2013, with the Dubai property market back up, the show was again vibrant, with the same trend continuing in 2014.

The three-day exhibition grew by 25 per cent last year, welcoming around 35,000 visitors. Several mega projects were launched during the event, including La Mer, a 9.5 million sqft mixed-use beachfront development by Meraas Holding, and Midtown – a Dhs 3bn development by Deyaar. Other developers such as Nakheel, Omniyat and Damac also unveiled new projects.

This year, Dubai’s real estate market has slowed down – with prices in the third quarter 6 per cent lower compared to last year, according to a report by CBRE. The report attributed the slowdown to a price correction resulting from market stabilisation.

However, despite the drop in prices, the pace of new project launches does not seem to have scaled back.

In the last week alone, several developers including Emaar, Damac and Dubai Properties have announced new residential projects in Dubai. Nakheel has also revealed that it is partnering with Minor Hotels Group for an AVANI hotel in its Deira Islands project.

All of these projects and several others are expected to be exhibited at Cityscape, which is being held from September 8 to 10 at the Dubai World Trade Centre.

According to organisers, more than 100 local developers will be participating at the event.

In total, more than 300 international and regional exhibitors will display their projects across 40,000 sqm of exhibition space.

Covering 4,200 square meters of exhibition space, Turkey represents the largest international pavilion at the show with 50 exhibitors, mainly due to the high demand from GCC investors.

Developers from the UK, Qatar, Egypt, the Americas, Canada and China will also have a presence at the event, organisers said.

Country manager at Chestertons UAE Robin Teh said: “Prime London residential property has delivered stronger growth than other major asset types since the global crash because these projects provide investors with attractive returns.

“On the other hand, UAE is definitely proving to be a key investment destination for British expats as well. We have seen the numbers rising during the last few years,” he said.

British investors pumped in over Dhs 4.7bn into the UAE real estate market in the first half of 2015.

“The UAE market is a more regulated and stable, with long-term opportunities for British investors. Rental yields are still higher compared with other developed locations, and this proves to be an attractive feature for British expats looking for income-generating assets,” said Teh.

He added: “Overall, we believe the market provides a good buying opportunity at current prices in the secondary market and a significant potential for capital appreciation in off-plan projects.”

Cityscape, now in its 14th edition, will be the largest in six years, organisers added.