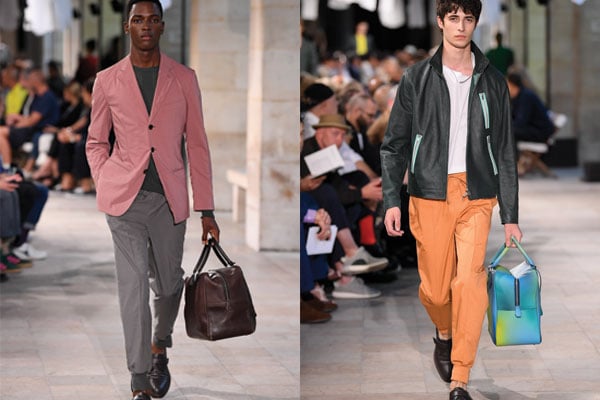 Veronique Nichanian is a legend at Hermès. She’s spent over three decades at the French fashion house shaping, and then regularly reinventing, the menswear codes of the brand. Where Nichanian goes, menswear creative gurus follow.

This Saturday, Hermès will debut its SS2020 men’s ready-to-wear collection.

In order to hazard a guess as to what to expect, it’s worth looking back at what the brand showcased over its last two big shows.

At the SS19 show last year, it was athlileisure that was being given its moment in the spotlight, though with distinct Hermès flourishes – H-fronted sports sandals were a pointed statement to make sure that everyone who caught a glimpse of one knew exactly where it came from.

If you need proof that Hermès was heading in the right direction, consider that in 2018 its ready-to-wear sales increased by 14 per cent.

At the Fall 2019 Hermès menswear show in January this year held at the Mobilier National, the brand featured classic tailored pieces in a colour range of blue, brown, red, grey and orange.

Again though, it was mixing the relaxed with the more formal look – a sharply tailored blazer coupled with tailored jogging pants.

Which brings us to the upcoming Hermès SS2020 show this Saturday at 10pm GST (8pm Paris time). You have to have the social clout equivalent of an Anna Wintour to land yourself a seat on the front row, or you could go down the easier route and get your virtual front row seat by viewing the show live below. You’re welcome.