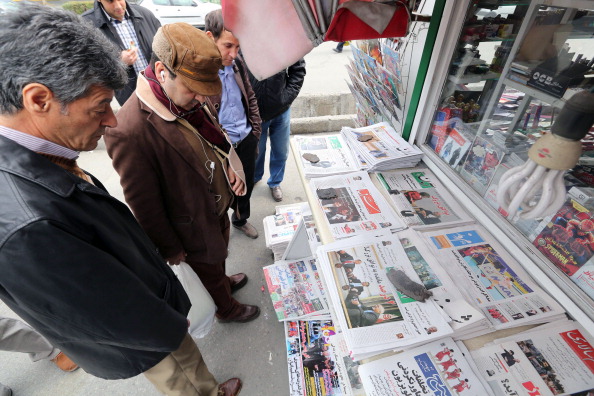 Iran’s nuclear deal with global powers was met with wary silence from Arab states on Sunday, with Iran’s only two Arab friends Iraq and Syria welcoming the accord but others keeping their opinions to themselves.

All Arab countries apart from Syria and Iraq are ruled by Sunni Muslims who mainly regard Shi’ite Iran as a foe and have been deeply uneasy over the prospect of any rapprochement with the West that would benefit Tehran.

Arab leaders worry that the deal, under which Iran is being given relief from sanctions in return for curbs to its nuclear programme, signals a thaw in the 30 years of hostility between Tehran and Washington which will give Iran more regional clout.

“I am afraid Iran will give up something on [its nuclear programme] to get something else from the big powers in terms of regional politics. And I’m worrying about giving Iran more space or a freer hand in the region,” said Abdullah al-Askar, chairman of the foreign affairs committee in Saudi Arabia’s appointed Shoura Council, a quasi-parliament that advises the government on policy.

“The government of Iran, month after month, has proven that it has an ugly agenda in the region, and in this regard no one in the region will sleep and assume things are going smoothly,” Askar said.

At the time he spoke, Saudi Arabia had yet to give any official response, and Askar stressed that he was giving his personal views. Other Sunni-ruled Arab states also had yet to respond on Sunday.

In the hours before Sunday’s deal was sealed, Gulf Arab leaders, including Saudi King Abdullah and the rulers of Qatar and Kuwait, met late on Saturday night to discuss “issues of interest to the three nations”.

The Gulf Arab rulers oppose Iran on countless fronts across the region, including Syria, where they fund and arm rebels fighting against Iran’s friend, President Bashar al-Assad. They accuse Tehran of fomenting unrest in a range of countries including Yemen, Bahrain, Lebanon and Iraq. Iran denies such meddling.

“The people of the region know Iranian policies and Iranian ambitions. And they know that Iran will interfere in the politics of many countries in the region,” Askar added.

By contrast, Iraq, which has a Shi’ite-led government and is the only Arab state that is openly friendly with both the United States and Iran, was quick to praise the agreement.

“The reaching of a deal between the Islamic Republic of Iran and the six international powers is seen as a major step for the region’s security and stability levels,” Prime Minister Nuri al-Maliki said in a statement.

“Iraq … expresses its full support for this step and its readiness to back it, so as to ensure the completion of the remaining phases and to promote a climate of dialogue and peaceful solutions,” the statement said.

The Syrian government of Assad, a longterm ally of Iran and a member of the Alawite sect that is an offshoot of Shi’ite Islam, was also pleased.

“Syria feels that reaching such an agreement is a sign that political solutions to crisis in the region are the best path for securing peace and stability, far from any threats of foreign intervention or use of force,” a ministry official was cited as saying by state news agency SANA.

Saudi Arabia and other Sunni-ruled countries have expressed unease in recent months over what they see as a recalibration of U.S. policy, especially since Washington abandoned plans in September to strike Syria to punish it for a chemical weapons attack on a Damascus suburb.

Syria agreed to give up its chemical arms to avert the U.S. strikes.