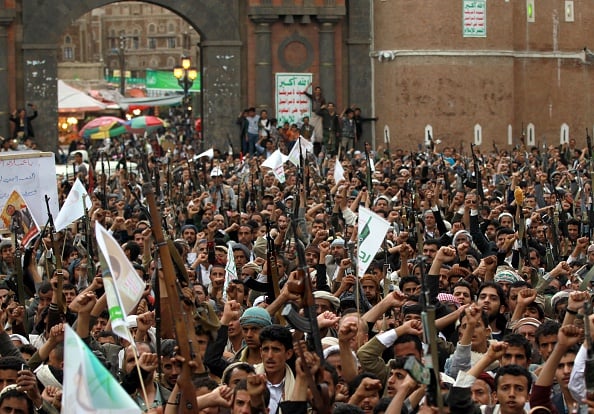 Warplanes struck the Yemeni capital of Sanaa overnight and after daybreak on Monday, residents said, the fifth day of a campaign by Saudi-led forces against Houthi forces opposed to President Abd-Rabbu Mansour Hadi.

One resident said the strikes appeared to hit mainly around the presidential palace, adjacent to the diplomatic quarter of the capital.

“It was a night from hell,” a Yemeni diplomat said.

Riyadh announced on March 26 that it and nine other Sunni Muslim countries had begun air strikes against the Shi’ite Houthi militia, who control the capital and are backed by Iran, Saudi Arabia’s main regional foe.

Iran, which denies helping the Houthis militarily, has condemned the offensive.

The Health Ministry, controlled by the Houthi movement, said on Sunday air strikes had killed 35 people and wounded 88 during the night of Saturday-Sunday. The figures could not be independently confirmed.

In Aden, held by Hadi’s embattled supporters, explosions and bursts of automatic-weapons fire could be heard late into the night across the southern port city.

No independent information was immediately available on the origin of the clashes. But callers to Aden television said it was a new push by the Houthis and allied Saleh fighters from the north toward Sheikh Uthman, a residential suburb of Aden.

No word was available on casualties. Some Arab television satellite channels said Houthis force were about 30 km (20 miles) north of Aden.

Aden al-Ghad newspaper published pictures of a number of burned tanks, armoured vehicles and other military vehicles that it said were destroyed during fighting in past days.