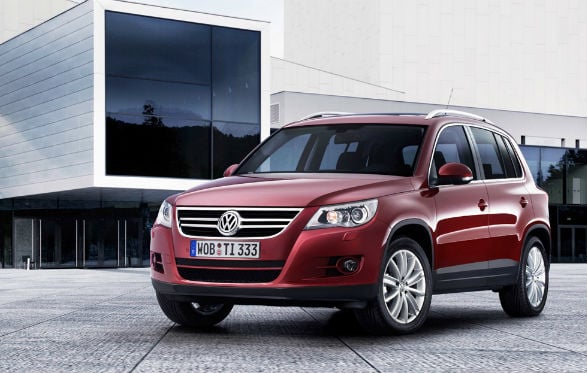 As the old saying goes, good things come in small packages. Never has that been truer in the SUV market than with the Volkswagen Tiguan. Though still bigger than the majority of cars on the roads, compared to giants such as Range Rover and the Cadillac Escalade, the Tiguan does seem the younger brother in the 4×4 family. But this ‘small’ package is better than a good thing; it’s superb.

The beneficiary of a recent makeover, the Tiguan pays homage to its Audi siblings with a string of LED headlights balancing either side of its sculpted bonnet and grill. The smaller car size may reduce the perceived arrogance of a big car, but the terrific front end still offers a menacing appearance.

Inside, the touchscreen display is as good as any previously considered the best and light-years ahead of some of its rivals. The in-built satellite navigation and maps function offer 2D and 3D viewing, the media player is smooth and the wireless phone connectivity faultless.

There is also an ample supply of the latest safety features including park assist, where the car literally parks itself – an eerie experience.

The only issue, and the main one for the whole car, is comfort. Despite its 12 settings of seat position and leather trappings, I never managed to get comfy in the driving seat – in fact I was quite uncomfortable for a lot of the time. But how much that affects a decision to buy this car or not is subjective – buying for comfort is normally associated with a grand tourer, not an SUV.

That said, the backseats offer huge amounts of legroom and great views through the full-length glass roof.

The R-Line model – Volkswagen’s sporty line – boasts a 2.0 TSI 4MOTION engine with a 6-speed automatic transmission, pushing out 200bhp. Paired with a torque output of 280Nm the statistics, though impressive, don’t really do the Tiguan justice – this small beast moves like it’s been bitten.

On more than one occasion I had a slightly bigger SUV pull up alongside me at traffic lights, looking to bully its way past me. But the R-Line performed like a champion, leaving the brute in my rear-view mirror; it never got old.

Despite my references to its size I should clarify the Tiguan is not small, not in comparison to the majority of cars. It is an SUV in every sense of the word. But on UAE’s roads – which are so densely populated with over-sized vehicles you’d think everyone was auditioning for a Monster Trucks derby – it is occasionally overshadowed.

It’s stunted rear-end offers a smaller boot-size than its Touareg brother and though the backseats are easily collapsible – a jump from 470 litres to 1,510 litres of space – that’s not an option if your children are in the car and you’ve got multiple bags and golf clubs in the boot.

All said and done though this is a fantastic car that packs a much stronger punch than expected. And at a starting price of Dhs100, 500 it must be the bargain of the SUV market. How’s that for size.