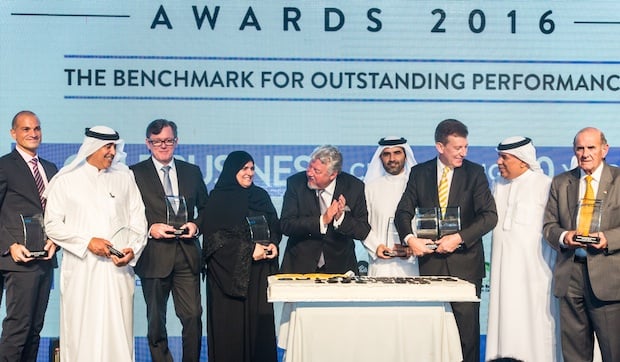 The fifth edition of the Gulf Business Awards was held at Taj Dubai on Tuesday evening with 25 trophies awarded to celebrate business excellence in the region.

The awards sought to applaud success in the corporate world and recognised companies and business leaders across several industries including energy, banking, real estate and aviation, among others.

For his outstanding achievements and contributions, the founder and chairman of the UAE-based GEMS Education – Sunny Varkey – was bestowed with the prestigious Lifetime Achievement Award for 2016. (Story continues after the video)

The coveted Gulf Business Company of the Year award was won by Jumeirah while the other special award for the evening – the 2016 Business Leader of the Year – was bagged by Paul Griffiths, the CEO of Dubai Airports. Griffiths dedicated his award to his team, specifically the firefighters and others who helped deal with the aftermath of the Emirates EK521 accident earlier this year.

H.E. Dr Raja Al Gurg, managing director of Easa Saleh Al Gurg Group, was awarded with the 2016 Businesswoman of the year trophy, while the SME of the year award was given to Fetchr.

The publicly voted Entrepreneur of the year category this year was won by founders of Careem, Mudassir Sheikha and Magnus Olsson.

Here’s a video of the awards evening with many of our winners also expressing their thoughts.

For more: Revealed: Winners at the Gulf Business Awards 2016

In pics: Gulf Business Awards 2016 – Companies of the year

In pics: Gulf Business Awards 2016 – Business leaders of the year