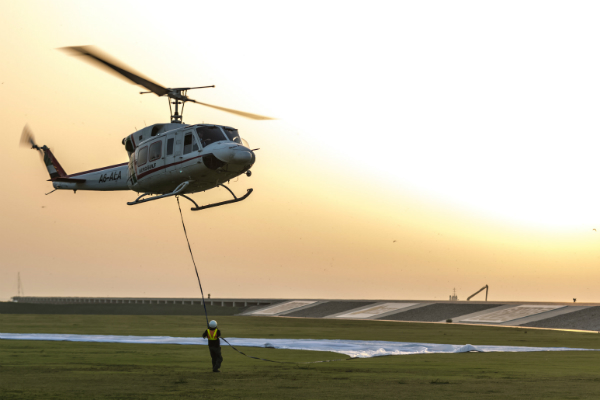 The screen took to the skies over Dubai in celebration of the Year of Zayed, the country’s commemoration of its late founding father Sheikh Zayed bin Sultan Al Nahyan.

It measured 300 feet and was towed by a Bell 212 helicopter while a second Bell 212 projected a short film about the Year of Zayed onto the screen using augmented reality and projection mapping technology.

The helicopters took off from Skydive Dubai before flying over the Dubai Coast and inland to Zabeel Park. They then journeyed to the Dubai Creek and finished their journey by returning to Skydive dubai. In total the flight took about 90 minutes.

Large display screens were setup for audiences to watch the record take place from the ground.

Officials from Guinness World Records officially signed off on the achievement

The previous record was set in New York City with a 250-foot screen.

“We are delighted to have celebrated the ‘Year of Zayed 2018’ in a memorable and ambitious way that captures the late Founding Father’s pioneering spirit and strengthens Dubai’s reputation as a leader in achieving world firsts,” said Wasl CEO HE Hesham Al Qassim.