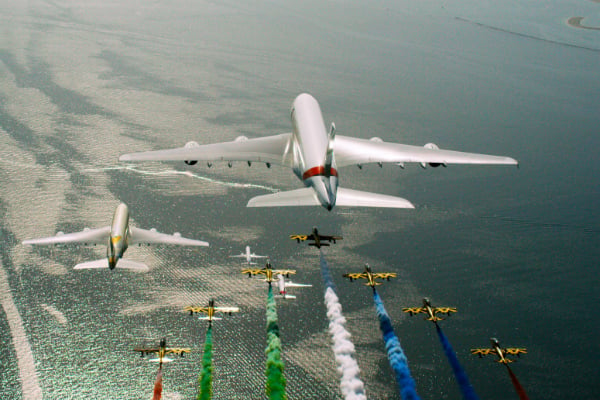 Emirates said the occasion offered the opportunity to commemorate the legacy and values of the UAE’s founding father Sheikh Zayed and showcase the country’s aviation success story to the world.

All of the commercial aircraft within the formation, described as a ‘first’, were emblazoned with ‘Year of Zayed’ decals.

The ‘stair step’ formation began at 1:00pm when the aircraft took off from Dubai World Central. They then held holding positions at altitudes ranging from 2,000ft to 5,000ft.

Together they flew from Ras Al Khaimah to Um Al Quwain and Ajman before passing landmarks including the Sharjah Corniche, Dubai’s Palm Jumeirah, World Islands and Burj Khalifa and finally the Abu Dhabi Corniche and the Sheikh Zayed Mosque. 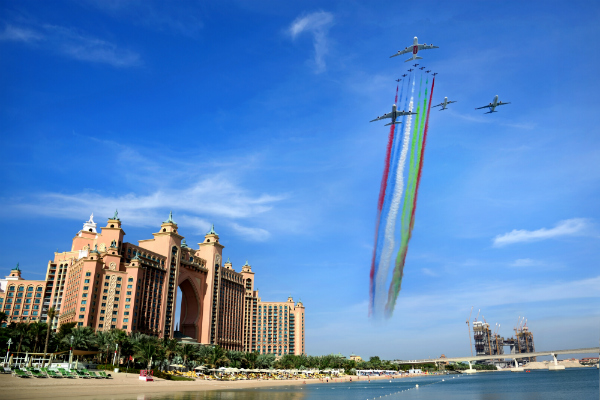 The aircraft then split and continued on to their respective airports for landing.

“This ground-breaking initiative showcases how unity and a shared vision can achieve outstanding results,” said Sheikh Ahmed bin Saeed Al Maktoum, chairman and CEO of Emirates Airline and Group and chairman of Flydubai.

“I am immensely proud of all of the teams across every airline, the UAE General Civil Aviation Authority, and all the organisations who came together to plan and execute today’s unprecedented flight formation which will go down as an extraordinary moment for UAE civil aviation.”

A rehearsal flight was held on 8 November 2018 to ensure that the formation positions worked appropriately with the Al Fursan air display team.