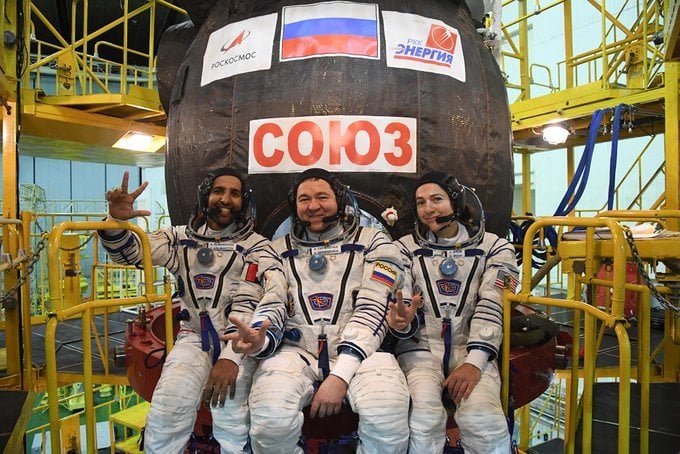 The UAE’s first astronaut is set to blast off to the stars today.

Hazza Al Mansoori is set to blast off from Baikonur Cosmodrome in Kazakhstan as a second flight engineer aboard a Soyuz MS-15 as part of the S61 Expedition today (September 25). The mission will take him to the International Space Station (ISS), aboard which he’ll orbit the globe until returning to earth on October 3.

In going to the ISS, Al Mansoori, 36, is set to become the first Emirati in space. If Al Mansoori, who was born in Abu Dhabi and is also a military pilot, is unable to go, another Emirati, Sultan Al Neyadi, will go in his place.

While in space, Al Mansoori will be conducting experiments related to the effects of microgravity on the human body and carrying out maintenance on the space station. He will also conduct experiments provided by 16 different schools across the UAE. The Mohammed Bin Rashid Space Centre, in cooperation with the Emirates Amateur Radio Society, will also coordinate live sessions with Al Mansoori while he is aboard the ISS.

In preparing for the mission, Al Mansoori and Al Neyadi have undergone more than 1,400 training hours and taken more than 90 courses, run by the likes of NASA, the Russian space agency Roscosmos, the European Space Agency, and more.

As part of his personal items luggage allowance, Al Mansoori is set to take with him a copy of the Holy Quran, the book “My Story” (“Qissati” in Arabic) by Sheikh Mohammed bin Rashid Al Maktoum, Vice-President and Prime Minister of the UAE and Ruler of Dubai, a photograph of UAE founder Sheikh Zayed bin Sultan Al Nahyan meeting three American astronauts in 1976, a silk UAE flag, 30 ghaf tree seeds, Emirati food, inflatable balls which represent Mars and Earth, and family photos.