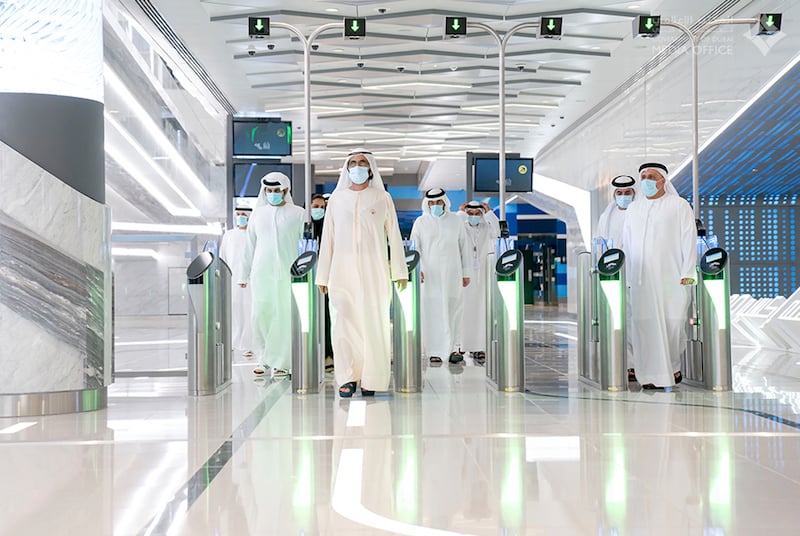 Dubai Metro’s new 15-km long Route 2020 will open to the public in September, and was built at a cost of Dhs11bn.

On Wednesday, Sheikh Mohammed bin Rashid Al Maktoum, Vice President and Prime Minister of the UAE and Ruler of Dubai, inaugurated the line which comprises of seven stations.

The new metro line – the third in Dubai, after the Red and Green lines – extends from Jabal Ali metro station on the Red Line to the Expo 2020 Dubai site.

There will be a total of 50 trains servicing the new route, and are expected to carry over 125,000 passengers daily.

It will cover areas including The Gardens, Discovery Gardens, Al Furjan, Jumeirah Golf Estates and Green Community which are home to over 270,000 residents.

.@HHShkMohd inaugurates the #Dubai Metro’s Route 2020 with a 15 km route length, seven stations and at a cost of AED 11 billion. Route 2020 will be open to the public this September. pic.twitter.com/SoVzg7cJDg

“12,000 engineers and technicians spent 80 million man hours to complete this project. As we promised, we say what we do and do what we say. This is Dubai,” tweeted Sheikh Mohammed.

Of the 15km track, 11.8 km is above the ground level, in addition to a 3.2km underground tunnel that extends from Al Furjan to the Green Community.

There will be a key train service to link Terminal 1 station and Terminal 3 station of the Dubai International Airport along the Red Line with Expo 2020 Station.

The track of Route 2020 extends 15km and links seven stations. The project offers safe and smooth transport for Expo visitors and residents of #Dubai communities. It is also viewed as a vital future link between several Dubai communities and Al Maktoum International Airport. pic.twitter.com/GMw624cZZT

There will also be a bus service for passengers departing from Expo Station to Al Maktoum International Airport to ease the movement of riders between the two airports.

In the near future, Route 2020 will be extended 3.4 km from Expo 2020 Station to Al Maktoum International Airport to ensure a modern metro link between the two airports.

.@HHShkMohd: Our objective is to provide people everything that ensures their wellbeing, stability and happiness and establish a prosperous future for the coming generations. pic.twitter.com/9TlHGzPapE

Testing phases of the Route 2020

Dubai’s Roads and Transport Authority (RTA) will carry out extensive testing along the new line ahead of its opening to the public. There are four phases. The first is the Static Test, where a motionless metro carriage is placed on the track for carrying out a series of tests including communication systems, automated operation systems, electrical systems, air-conditioning, onboard electronic devices, lighting systems as well as motoring and braking equipment. This phase is now complete.

Shortly, the RTA will begin the third phase of testing which aims to verify system reliability and stability during which the system will be running continuously in a mode similar to normal operations, but without passengers, with the aim of achieving the targeted operational performance indicator (KPI).

The fourth and final phase features a trial run aimed at verifying the readiness of the operator before the start of actual service operations. The trial includes 14 days of operations without riders to test the various components of the metro system in all modes including normal, degraded and emergency situations.

“Route 2020 has a capacity of 46,000 riders per hour in both directions (23,000 riders per hour per direction). RTA’s studies expect the number of riders using Route 2020 to reach 125,000 per day in 2021, and 275,000 riders per day by 2030. Studies also reveal that Expo 2020 Station is expected to record about 35,000 daily Expo visitors during weekdays, and the number to increase to 47,000 daily visitors during weekends. This number accounts for 29 per cent of the total expected number of daily visitors to Expo,” said Mattar Mohammed Al Tayer, director general and chairman of the Board of Executive Directors of RTA.

Along with the new line, the total length of the metro line stands at 90km, while the overall rail network in Dubai stands at 101km (including the Dubai Tram which operates on a 11km track).

The opening of the Route 2020 Project is expected to bring a host of technical, economic and investment benefits. Economically, the project is expected to appreciate the rental and sales values of residential and commercial properties within 250 to 500 metres of metro stations by 20-30 per cent.

Costs saved due to easing of traffic congestions is estimated to reach Dhs3.5bn in 2022 and Dhs7bn by 2030.

The project is also expected to further attract global investors to the emirate as the chosen destination to hosting international conventions and exhibitions, and these benefits are expected to bring a value of Dhs1.7bn by 2022 and Dhs2.7bn by 2030.