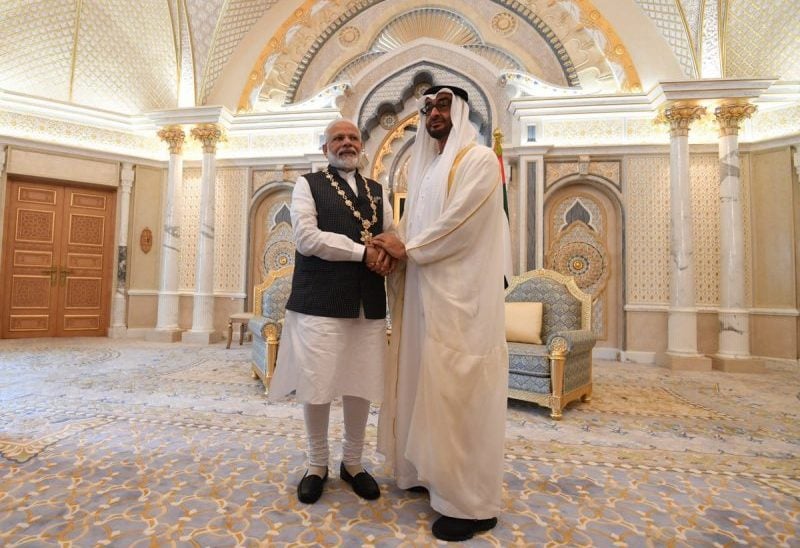 The two sides also explored opportunities for expanding joint cooperation across economic, commercial, investment, cultural and energy fields, and for tapping into the business potentials available in the two countries.

Sheikh Mohamed stressed the joint interest of the UAE and India on security in the Arabian Gulf, and emphasised the UAE’s unwavering stance regarding the importance of guaranteeing the freedom and safety of navigation throughout this region.

He also said the UAE supports all efforts to ensure peace on the Indian subcontinent, “as the region is of great strategic importance for security in Asia and the world”.

The two sides stressed the importance of continued cooperation, coordination and joint work.

Modi was also presented with the UAE’s highest civilian honour, the Order of Zayed, by Sheikh Mohamed at the Presidential Palace on Saturday.

In a tweet, Modi said he was “humbled” by the gesture.

Humbled to be conferred the ‘Order of Zayed’ a short while ago. More than an individual, this award is for India’s cultural ethos and is dedicated to 130 crore Indians.

I thank the UAE Government for this honour. pic.twitter.com/PWqIEnU1La

Modi also launched a special commemorative stamp to mark the 150th birth anniversary of Mahatma Gandhi during the visit.

Mohamed bin Zayed presents the Indian Prime Minister with the Zayed Medal in recognition of his role in promoting friendship and cooperation; witnesses the launch of a special commemorative stamp to mark the 150th birth anniversary of Mahatma Gandhi. pic.twitter.com/Evf4YJqdFz

The Indian leader also unveiled the Indian payment platform RuPay in the UAE.

Similar to Mastercard and Visa, the RuPay card can be used at point-of-sale terminals.

Three banks in the UAE, including Emirates NBD, Bank of Baroda and First Abu Dhabi Bank will start issuing the card by next week, and it will be accepted at 175,000 merchant locations and 5,000 ATM and cash access locations, the Indian embassy said.

The RuPay card comes to UAE!

PM @narendramodi makes a special purchase, which he would offer as Prasad at the Shreenathji Temple in Bahrain tomorrow. pic.twitter.com/x4WTt1fm8P