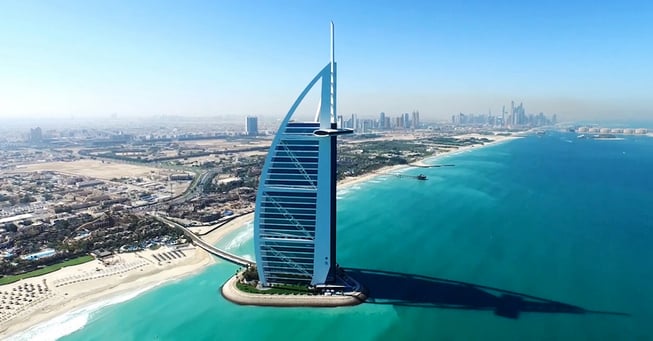 Called View from Above, it is one of the largest aerial filming projects ever conducted using unmanned aerial vehicles, a statement said.

Footage for Dubai was provided by Dubai Film.

Emirates’ divisional senior vice president Boutros Boutros said: “The beautifully crafted films produced for this project not only feature destinations within our network in a stunning new light, but also utilise innovative technologies in creative ways to produce dramatic footage.

“Our aim is to always connect with our audiences around the world, and we hope that people are inspired by these unique films.”

The aerial capabilities of the drones meant the project team could produce previously unseen aerial imagery and perspectives even when operating in tighter spaces, the statement said.

The drones were also able to reach locations that would have been challenging with traditional helicopter and fixed wing aerials, like deep caves and beneath jungle foliage. In Japan for example, drones were used to film in between the branches of cherry blossom trees and closely hover over steep waterfalls.

Justin Thomas Ostensen from Shotwell media, who piloted the drone to shoot the Seattle film said: “Safety really comes down to the individuals and companies flying drones to be responsible, cautious, follow common sense rules and operate within a strict set of pre-flight and post-flight procedures.

“Drones are very safe with failsafe features that create high levels of reliability and stability. However, extensive experience is required to operate drones for aerial filming. A blend of technical knowledge and creativity are a prerequisite to achieving cinematic aerial imagery.”

Over 13 qualified drone pilots from around the world worked on the filming project, which was produced and directed by MOFILM.

All of the films can be viewed on the View from Above site.