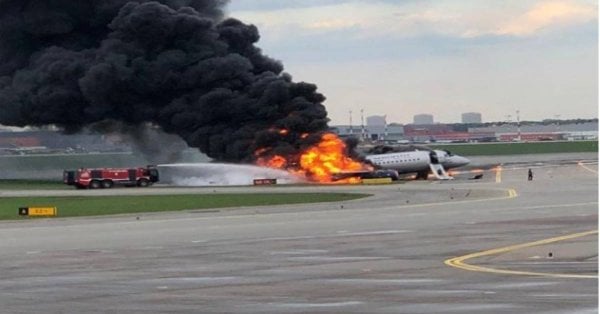 At least 41 people including two children were killed when a passenger plane burst into flames while making an emergency landing in Moscow on Sunday.

Footage of the incident showed Aeroflot flight SU 1492 crash-landing and then skidding along the runway at Sheremetyevo international airport with flames erupting from its fuselage.

Once the plane came to a halt, passengers used emergency inflatable slides at the front of the plane to escape and then ran away from the burning aircraft.

At least two people have been killed after a plane landed on fire at an airport in #Moscow pic.twitter.com/PdomsqpUPf

“There were 78 people including crew members on board the plane,” AFP quoted the Investigative Committee as saying in a statement.

“According to the updated info which the investigation has as of now, 37 people survived.”

Breaking: Video shows inside the Aeroflot plane on fire in Moscow, Russia. At least 13 people died in the accident. pic.twitter.com/sysCTRi2qo

Reports said the plane was flying from Moscow to the northwestern Russian city of Murmansk, and reported a distress signal soon after take-off.

“After the take-off, the crew reported an anomaly and decided to come back to the departure airport. At 6.30pm, the aircraft made an emergency landing.”

The carrier said the plane had to return to the airport “due to a technical reason” and that its engines caught fire upon landing.

No clear official reason has been provided so far.

The Sukhoi Superjet-100 was the first civilian aircraft developed by Russia in the country’s post-Soviet era.

Aeroflot is the jet’s main operator, and placed a record order for 100 Superjet-100s in September last year.