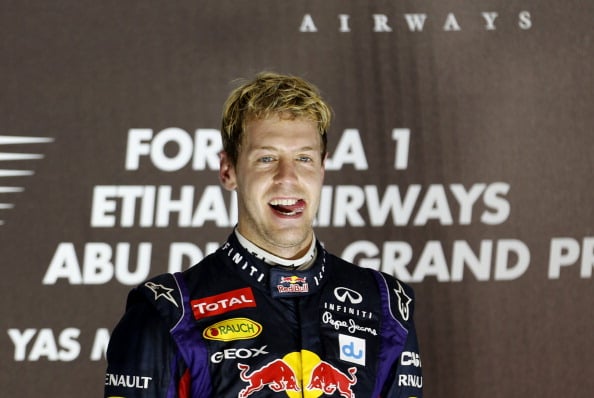 Sebastian Vettel dominated the Abu Dhabi Grand Prix on Sunday, leading every lap of the race from the first corner to seal his seventh consecutive victory.

The Red Bull driver started from second position but beat his teammate Mark Webber into turn one, and from then on used the Yas Marina circuit to showcase the form and talent that has made him a four-time world champion, finishing an amazing 30 seconds ahead of the rest of the pack.

“The car was absolutely brilliant. Not much more to say. Massive gaps, big surprise,” said Vettel, speaking to the BBC.

Vettel’s lighting start saw him extend a significant gap over Webber allowing him to re-join the race still in the lead after pitting for fresh tyres on lap 14.

Webber meanwhile saw his hopes of catching the German dashed when he was unable to pass Rosberg during his first stint and was later held up by Force India’s Adrian Sutil after pitting on lap eight.

By the time Webber worked his way back into second place, his teammate was 27 seconds clear and in uncatchable territory.

“The start wasn’t great,” Webber told the BBC. “Seb got a very good gap, I had to reposition on the primes [tyres]. Seb was gone. In another category out front.”

The result marked Vettel’s 11th win of the season with the 26-year old still on track to equal Michael Schumacher’s record of 13 victories in a single season as well as Alberto Ascari’s 60-year record of nine consecutive F1 grand prix wins.