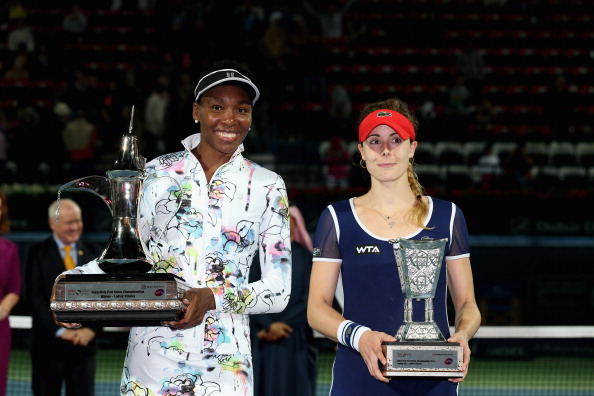 Venus Williams crushed Frenchwoman Alize Cornet 6-3 6-0 in the final of the Dubai Championship on Saturday, the veteran American bagging her first singles title since 2012.

The seven-times grand slam winner made light work of Cornet who stunned Venus’s sister Serena on Friday to deny the siblings their first final meeting in five years.

“I think the difference between me and Serena was I put a few more balls in the court,” said Venus who has struggled for form since being diagnosed with a fatigue-causing disease in 2011.

“Winning all those grand slam titles, playing deep and getting to the final so many times, it takes a lot of nerve, mental prowess, so I’d like to think I’m on that path,” she told reporters.

Williams, 33, has made a mixed start to 2014, suffering a first-round exit at the Australian Open and more disappointment in Doha last week.

She did not drop a set in Dubai, though, and beat five higher-ranked opponents including former world number ones Ana Ivanovic and Caroline Wozniacki.

“When things got tough I definitely got going this week. If I was down break point, when push came to shove I was pushing and shoving,” added Williams who will climb from 44th in the world back into the top 30 for the first time since May 2013.

“I’m not looking to do anything I did in the past because I already did that. I’m looking to improve and be a better, smarter Venus.”

The American started slowly against Cornet, who hugged the baseline just as she did against Serena to take the first break of serve and go 2-1 up after Williams made successive errors, the first a loose volley at the net and the second a long forehand.

The setback stirred Williams and she broke back immediately with a ferocious return before surging into a 5-2 lead by breaking again.

Cornet, 24, showed her despair as she wilted under a barrage of brutal groundstrokes from her opponent.

“The first set was very important. That’s why I was a bit emotional because I wanted to do better,” said the Frenchwoman.

“She was playing more aggressive. She was pushing me out of the court very far from the baseline and I didn’t play as deep as yesterday, didn’t serve as well.”

Cornet saved two set points when serving at 2-5 only for Williams to comfortably serve it out, dragging the world number 26 out wide with a fierce backhand that she could only scuff into the ground.

A double fault and a wild forehand on successive points gave the American another break at the start of the second set and she broke twice more for a 5-0 lead.

Cornet saved one match point with a backhand volley lob before a long forehand gave Williams a 45th career title and a third Dubai crown.