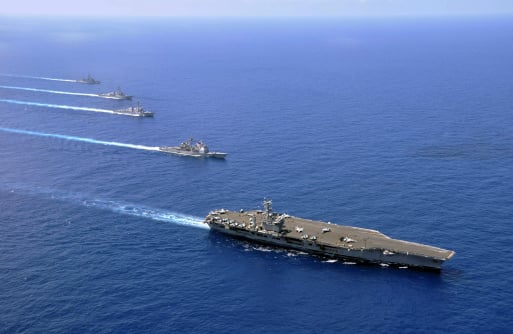 The USS Nimitz aircraft carrier and four other ships in its strike group moved into the Red Sea early on Monday, U.S. defense officials said, describing the move as “prudent planning” in case the ships are needed for military action against Syria.

The officials said the Nimitz entered the Red Sea around 6 a.m. EDT (1000 GMT), but the strike group had not received any orders to move into the Mediterranean, where five U.S. destroyers and an amphibious ship, the USS San Antonio, remain poised for possible cruise missile strikes against Syria.

Moving the Nimitz into the Red Sea was aimed at putting more U.S. assets in place if they are needed to support what U.S. officials still describe as a limited attack against Syria after it used chemical weapons against civilians.

“It does place that strike group in a position to respond to a variety of contingencies,” said one official, who was not authorized to speak publicly.

The nuclear-powered Nimitz is accompanied by the Princeton, a cruiser, and three destroyers – the William P. Lawrence, Stockdale and Shoup, according to the officials.

They said there had been no change regarding six U.S. Navy ships now in the eastern Mediterranean, but military planners were reassessing the situation given a delay in the cruise missile strikes that had been expected this past weekend.

President Barack Obama on Saturday backed off imminent strikes by the destroyers off the coast of Syria until Congress had time to vote its approval. Defense officials said the delay gave them more time to reassess which ships and other weapons will be kept in the region – and whether some may be allowed to leave. Congress returns to Washington Sept. 9.

The U.S. Navy doubled its presence in the eastern Mediterranean in the past week, effectively adding two destroyers to the three that generally patrol the region, and diverting the San Antonio, which carries four massive CH-53 helicopters and 300 Marines, from another mission.

Two of the destroyers were due to be relieved but are now serving along with the ships that were to replace them.

It was not immediately clear how long those ships would be asked to remain in the eastern Mediterranean, but officials suggested that changes could be made to the current fleet there in coming days.

The destroyers are carrying a combined load of about 200 Tomahawk missiles, but officials say a limited strike on Syria could be accomplished with half that number.

Retired Admiral Gary Roughead, who served as chief of naval operations during the 2011 strikes on Libya, said the Navy’s decision to move the carrier into the Red Sea meant it was closer to the “points of tension.”

“It’s a prudent move that provides for maximum naval flexibility in the region,” Roughead, who is now a fellow at Stanford University’s Hoover Institution, told Reuters. “It is not unusual to move carriers around in North Arabian Sea and Red Sea as events dictate.”

Reuters reported Sunday that officials had rerouted the Nimitz carrier group, which was due to sail east around Asia to return to its home port in Everett, Washington, after being relieved in recent days by another aircraft carrier, the USS Harry S. Truman.

Officials said the USS Kearsarge, a large-deck amphibious ship, remained in North Arabian Sea, and there were no plans to move the ship into the Red Sea.

The Kearsarge, which carries 6 AV-8B Harriers, 10-12 V-22 Ospreys and helicopters, played a key role in the 2011 strikes on Libya. Two Ospreys launched from the ship helped rescue a downed F-15 pilot during that operation.