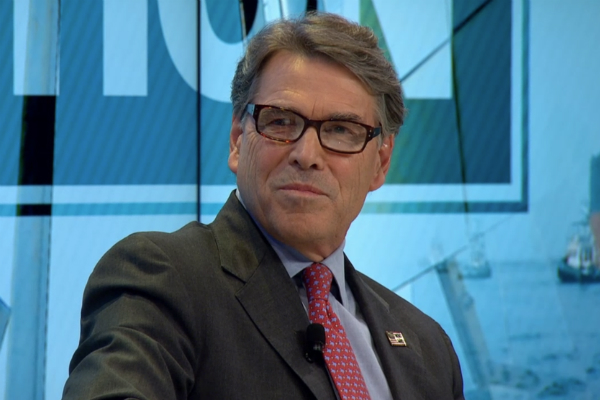 US energy secretary Rick Perry told oil super-powers Russia and Saudi Arabia he believed US shale oil boom would not become a spoiler for oil markets because new production would be absorbed by fast rising global demand.

Perry, a former governor of Texas, the heartland of the US shale oil boom, was speaking at a rare joint panel with Russian and Saudi energy ministers, Alexander Novak and Khalid al-Falih, at the World Economic Forum in Davos.

“I don’t think American shale production will be a spoiler. There is a lot of reforms going on around the world – in the kingdom [of Saudi Arabia], in Mexico, in India – those reforms have the potential to really drive the consumption,” he said.

OPEC led by Saudi Arabia and non-OPEC Russia have reduced production during 2017-2018 to prop up oil prices.

The United States, which rivals Russia and Saudi Arabia for the position of the world’s largest oil producer, is not participating in cuts as its industry is represented by private producers who can be sued for collusion if they join the deal.

“We have a bit of a feast rather than famine now but it is good for the world,” he added.

Novak and Falih both said the markets were too much focused on the swings in US shale production, which still represented a fairly modest portion of the global output.

Falih said Mexican and Venezuelan output were declining and predicted that global oil demand would soar in the next 25 years to 120 million barrels per day from the current levels of just under 100 million.

US shale output is expected to rise by 1 million bpd this year, to take US total production well above 10 million bpd.

Novak also said demand was rising fast and old oilfields around the world were depleting, meaning U.S. production growth was unlikely to tip oil markets back into a surplus.

Russia has previously voiced concerns oil prices might have risen too fast and were encouraging shale oil growth too much.

Novak said oil producers would ultimately go back to direct competition when the OPEC/non-OPEC deal expires but did not say when it could happen.

Falih said OPEC and its non-OPEC allies would exit from oil production cuts very gradually and smoothly in order not to shock markets in the early part of 2019, when demand will seasonally slow.

He said it was very unlikely cuts could be exited in June when OPEC meets next time and added that he believed they could be just adjusted at some point. He also said OPEC could change the level of stocks it was targeting by its output reductions.

He also said the strategy of maximising production during the previous minister Ali al-Naimi in 2014-2015 had caused too much pain for both producers and consumers when oil prices fell too steeply and became unpredictable.