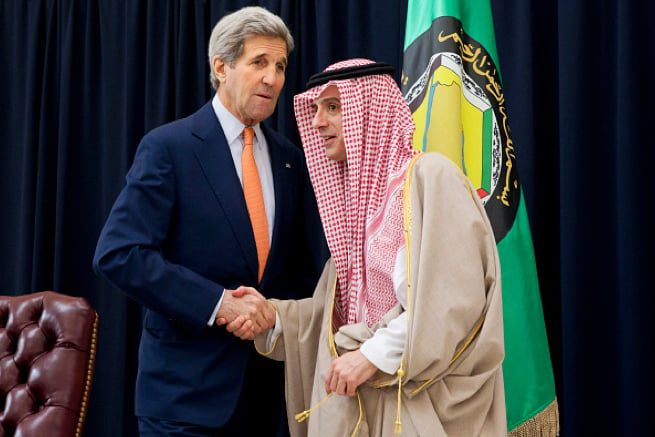 The United States is aware and “concerned” about activities carried out by Iran in certain other countries, the US secretary of state John Kerry told Gulf Cooperation Council ministers on Saturday.

“We have concerns about the support received by some terrorists groups like Hezbollah or Iran’s self-support for its missiles programme. Note that President Obama has responded to these concerns,” Kerry said in a meeting with GCC foreign ministers in Riyadh.

He also sought to reassure them about the nuclear deal that the US and other world powers have signed with Iran, which came into effect this month.

“There is support for fully and comprehensively implementing the agreement, eliminating nuclear weapons in the region as a strategic priority for all parties,” the official Saudi Press Agency quoted Kerry as saying.

Saudi Arabia and some of the other GCC states cut all diplomatic ties with Iran earlier this month after the kingdom’s embassy was attacked by protestors in Tehran.

“We have discussed the Iranian interference in the region’s affairs, ways to confront it in addition to discussion on the latest developments regarding the outcome of Camp David summit,” Saudi foreign minister Adel Al-Jubeir said.

In a joint news conference with Kerry, Al-Jubeir also confirmed that the US was well aware of “Iran’s negative practices and activities in the region.”

“No, I don’t see a coming together of the United States and Iran. Iran remains the world’s chief sponsor of terrorism,” he said.

The two sides also discussed about ways to overcome the conflicts in Syria and Yemen.

Kerry added: “We have discussed in detail during the meeting, the agenda awaiting us, their urgent requirements and the issues on the table. We underscored the importance of the partnership between the United States of America and the GCC countries, the commitment towards making this partnership a success in addition to agreement to soon meet anew and regularly.”