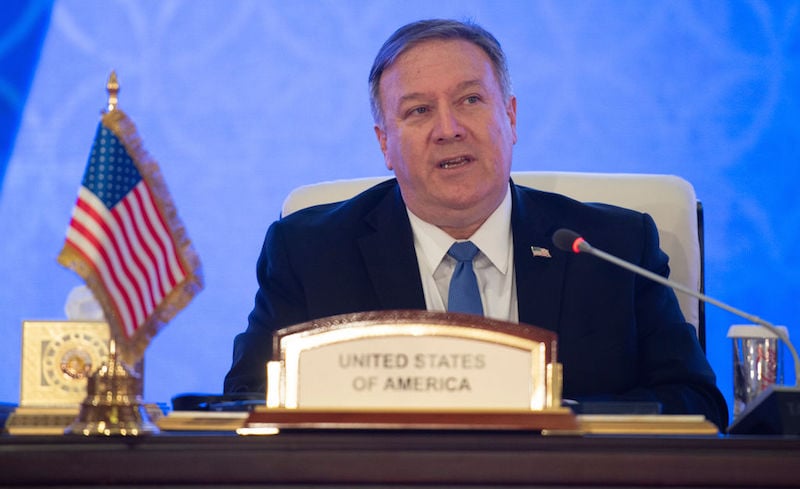 U.S. Secretary of State Mike Pompeo said on Sunday that a rift between Qatar and its Gulf Arab neighbours had gone on for too long and was threatening regional unity needed to counter Iran.

The United States, an ally of the six-nation Sunni Muslim GCC, sees the rift as a threat to efforts to contain Iran and has pushed for a united Gulf front.

“When we have a common challenge, disputes between countries with shared objectives are never helpful,” Pompeo, who is on a tour of the Middle East, told a news conference in the Qatari capital, Doha.

“They never permit you to have as robust a response to common adversaries or common challenges as you might,” he added.

Gas-rich Qatar says the boycott is aimed at undermining its sovereignty and it has started charting a course away from its Gulf neighbours, including forging new trade partnerships, strengthening ties with Turkey and quitting OPEC. Those moves have deepened expectations that the dispute will not be resolved quickly.

“We’re hoping that the unity of GCC will increase in the days and weeks and months ahead,” Pompeo said, adding that Gulf unity was essential for a planned Middle East Strategic Alliance (MESA) that would also include Jordan and Egypt.

Saudi Arabia and the UAE have repeatedly said the dispute is not a top priority and assured Washington it will not affect defence cooperation.

Pompeo later told reporters that he had also raised the rift with officials in Bahrain, Egypt and the UAE. “It’s … not at all clear that the rift is any closer to being resolved today than it was yesterday and I regret that,” he said.

Later, Pompeo traveled to the Saudi capital, Riyadh, where he pushed Saudi authorities to continue to investigate the murder of Jamal Khashoggi, the US-based Washington Post columnist from Saudi Arabia.

Arriving in Riyadh, Pompeo was greeted at the airport by Adel al-Jubeir, the Saudi minister of state for foreign affairs, Prince Khalid bin Salman, the Saudi ambassador to Washington, and US Charge D’Affaires Christopher Henzel.

Pompeo and the two Saudi officials met for an hour, according to reporters traveling with him and they discussed tensions with Iran, the conflicts in Syria, Yemen, Libya and Afghanistan and the Khashoggi case, the State Department said in a statement.

“The secretary emphasised the importance of Saudi Arabia continuing its investigation into the murder of Jamal Khashoggi in order to ascertain facts, assess information, and hold those responsible accountable,” it added.

Pompeo is also expected to meet with the kingdom’s Crown Prince Mohammed bin Salman to discuss the investigation into Khashoggi’s death.

A CIA assessment has blamed Prince Mohammed for ordering the killing of Khashoggi, a longtime royal insider who had become a critic of the crown prince, inside the Saudi consulate in Istanbul on Oct. 2.

Top Turkish officials have also tied the death of the journalist, whose body was dismembered and removed from the building to a location still publicly unknown, to the highest levels of Saudi leadership.

Saudi officials have denied accusations that the prince ordered the murder.

The sister of Loujain al-Hathloul, one of several Saudi women’s rights activists detained in the kingdom since last summer and accused of treason, pressed Pompeo to raise the issue with officials in Riyadh.

In a New York Times op-ed, Alia al-Hathloul described how her sister was allegedly tortured and threatened while in detention. “Even today, I am torn about writing about Loujain, scared that speaking about her ordeal might harm her,” she wrote.